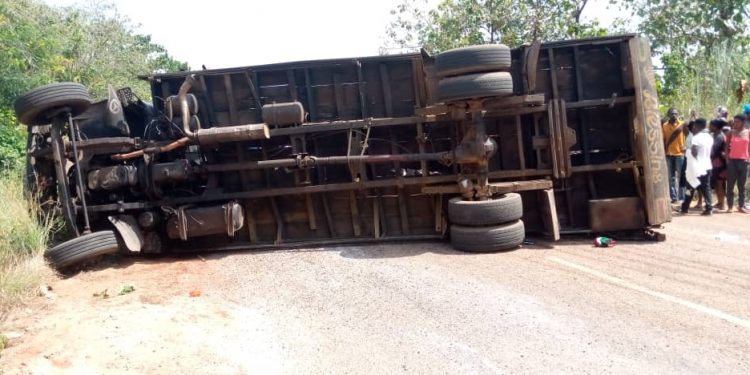 Six members of the opposition National Democratic Congress (NDC) have been confirmed dead with others injured in a road accident at Frante, a community within the Ejura Sekyeredumasi municipality of the Ashanti Region.

According to narrations by some eyewitnesses, the supporters were heading to Ejura to a rally being attended by the flagbearer of the NDC, John Mahama who is on a campaign tour of the Ashanti Region.

During a visit to the Ejura government hospital by John Mahama and his campaign team, the Ashanti Regional Deputy Secretary of the NDC, Mathew Kojo Njourkone told journalists that the crash occurred after the driver of the car attempted to swerve a rider who had driven into his path.

“Well as you know, it is a convention that whenever we are going to have a rally of this nature, you expect party faithful to move from nearby areas to participate and it is as a result of such a move that some of our members also decided to move to join and unfortunately on their way, their vehicle got involved in an accident.”

“Just after they set off, they didn’t even make a kilometre of the journey and this sad situation happened. From the eyewitnesses around, they indicated that a motorbike crossed the driver so the driver in an attempt to swerve him was lost control and the accident occurred.”

In a statement signed by Kwame Zu, the Ashanti Regional Secretary of the NDC, the party noted that Mahama will meet with traditional and religious leaders, party members and other identifiable groups in the region during the tour.