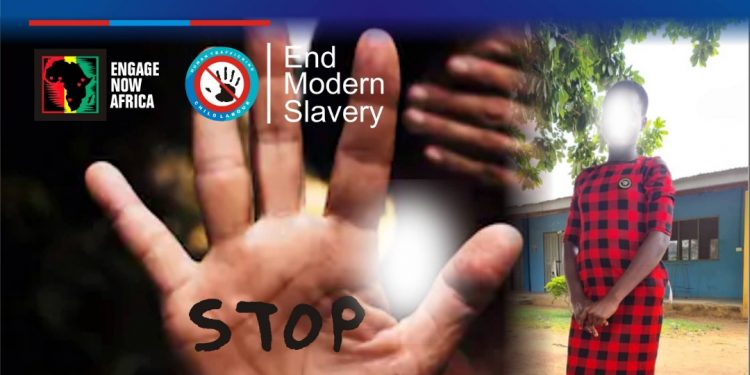 Engage Now Africa (ENA), End Modern Slavery in partnership with the Koforidua Department of Social Welfare have rescued a 14-year-old girl from child trafficking and forced labour in Adweso in the Koforidua municipality of the Eastern Region.

Investigations conducted by End Modern Slavery (EMS) revealed that the victim whose name was given as Mary was trafficked by her own father three months ago.

The incident was, however, reported by two good samaritans– a Pastor called Richmond Nkansah, who oversees a faith-based organization and an opinion leader– all in Apeatu the community Mary was trafficked from to Adweso.

Engage Now Africa, upon hearing the case engaged the regional directorate of social welfare in Koforidua for the rescue operation.

The findings added that, before Mary was rescued, the Chief of Apeatu summoned the perpetrator who also happens to be the father, and after several reprimands by the Chief, he was then asked to provide 3 pieces of eggs and an amount of GHS30 as a fine for committing such heinous offence in the community.

The father was not able to pay the full amount. He, however, paid GHS20 including the 3 eggs.

Engage Now Africa (ENA) investigations further revealed that, Mary’s father out of ignorance took the daughter from the mother who he could not feed and placed her under the care of a friend who also later sent Mary to his friend when he started having some challenges with the girl. And she became the final receiver of the girl, subjected the girl into domestic servitude.

The mother whose daughter was allegedly forcefully taken from her by her abandoned husband who she had 5 children with him including Mary, was glad to see her daughter after three months of separation.

Engage Now Africa (EMS) obtained a certificate of reunification from the Department of Social Welfare to document the case and also supported the mother with their sustainable livelihood package and medical screening of the girl.

The suspect [the father] has since been invited by the law enforcement agency for further investigations.

Engage Now Africa used the opportunity to educate the Chief and community members never to hoard such incidents in their localities but rather they should willingly expose them because child trafficking is a crime and against human rights.

Speaking to the media, Mr. Afasi Komla, Director of End Modern Slavery (EMS) of Engage Now Africa (ENA) touted that the main aim of ENA is to heal, rescue and uplift individuals in Africa.

He said the major root causes of modern slavery are poverty, ignorance and economic challenges.

“We have seen highly educated persons fall victims to fraud and slavery due to lack of knowledge on the subject”, he added.

He indicated that in view of that, Engage Now Africa, End Modern Slavery led by Mr. Afasi Komla had made several efforts in working with stakeholders to create public awareness thereby facilitating a deeper understanding of human trafficking issues in vulnerable communities and again, to increase coordination among communities, districts, regional and international actors in the fight against human trafficking and child labour.