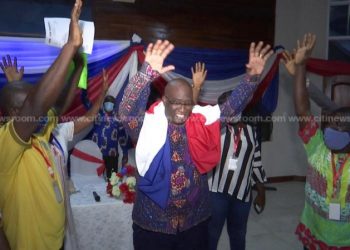 The New Patriotic Party’s (NPP) parliamentary candidate for the Essikado-Ketan constituency in the Western Region, Joe Ghartey has won the seat for the fifth time.

The Member of Parliament (MP) first won the Essikado-Ketan seat in 2004 and has continued to retain the seat ever since then.

In the December 7, 2020, polls, out of the 52,392 votes cast, the Minister for Railways Development garnered 26,701 whereas the National Democratic Congress’ (NDC) Dr. Grace Ayensu Danquah followed with 24,527 votes.

The candidature of the Ghana Union Movement’s (GUM), Frank Cobbinah was endorsed by 629 voters.

Meanwhile, Dr. Ayensu Danquah says she will not accept the result.

“Joe Ghartey tampered with the results. I won the seat fair and square. I went to the grassroots, every corner of this constituency to sell my message. This can’t happen again. The incumbent cannot continue to tamper with votes. He better step aside and let me take my rightful place as the MP-elect.”