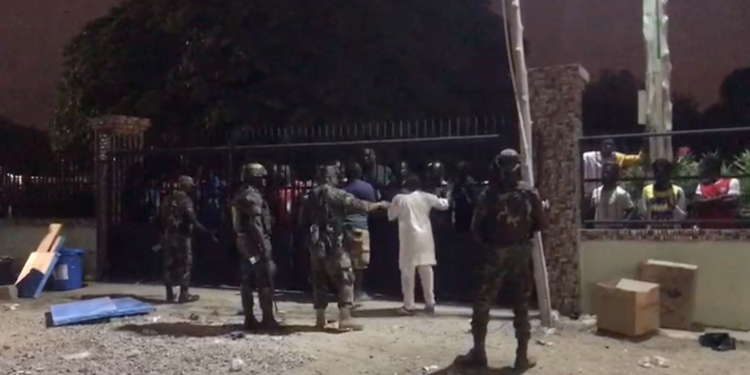 Security presence at the scene of the shooting

One of the wounded persons from the shooting incident that occurred in the Ablekuma Central Constituency of the Greater Accra Region during the just-ended election has died.

Thirty-year-old Ibrahim Abass passed on at the Korle Bu Teaching Hospital where he was receiving treatment.

According to eyewitnesses, the deceased and four other persons, including a police officer, were shot at the collation centre in the constituency at the Odorkor Police Church.

This brings to six, the known number of persons who lost their lives during the 2020 general elections.

In a Citi News interview, the Deputy Secretary of the National Democratic Congress (NDC) in Ablekuma Central, Sumaila Ibrahim narrated the incidents leading to his death.

“He is the same guy who was shot on the election day at the collation center in Ablekuma Central. He was an NDC party member who was at the collation center to give our people morale. One of the military officers opened fire on them. Some of his intestines came out. And we took him to the hospital, he was in intensive unit till he passed on this morning.”

A journalist, Pius Kwanin Asiedu of Ghana Newswatch online portal, was also shot in the leg at the Ablekuma Central Collation Centre.

He is currently receiving treatment at the Greater Accra Regional Hospital.

A suspected shooter, known so far as Kola, is facing criminal charges.

In a statement, the Ghana Police said that there were 61 recorded cases of electoral and post-electoral violence across the country.

Twenty-one of the incidents were true cases of electoral violence, six of which involved gunfire.