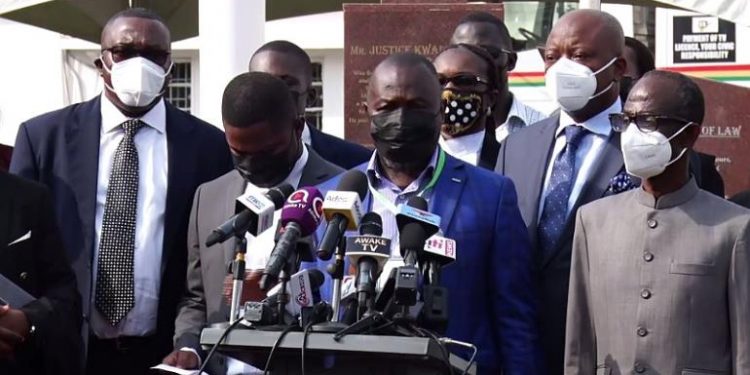 The legal team of John Dramani Mahama in his ongoing Election Petition says the Supreme Court’s ruling not to allow him to reopen his case was wrong.

According to Dr. Dominic Ayine, one of the spokespersons of Mr. Mahama, the petitioner, the apex court used wrong legal premises in ruling on the matter.

Dr. Ayine made this known while interacting with the media after the court hearing on February 16, 2021.

He said, although his team is disappointed with the ruling, they are bound to respect it.

“This morning the Supreme Court gave a ruling in respect of our motion to reopen the petitioner’s case. That motion was filed a few days ago with a view to having the opportunity to reopen our case and have the chairperson of the EC, Mrs Jean Adukwei Mensa testify in our case. We wanted her to come and testify as an adverse witness which is allowed under the rules.”

“It was our strategy to serve a subpoena on her since she has decided not to give a testimony even after filing a witness statement. But the Supreme Court has given a decision in which it basically said she’ll not be compelled to testify. In our view, the court was wrong and the reasons of the court were based on wrong legal premises, but the Supreme Court is the final decision maker when it comes to the law in the country, and we are bound by what it has said.”

What did the Supreme Court say?

The Supreme Court on Tuesday, February 16, 2021, turned down a request filed by the Mr. Mahama, to re-open his case which his lead lawyer, Tsatsu Tsikata closed last week.

The court its ruling read by the Chief Justice, Kwasi Anin-Yeboah, said the petitioner’s legal team failed to provide any evidence to warrant the reopening of their case hence the dismissal of the application.

Mr. Mahama and his legal team filed the application following the Supreme Court’s decision to uphold a motion filed by the legal teams of the first and second respondents — the Electoral Commission and President Nana Akufo-Addo– to not call any witness in the case.