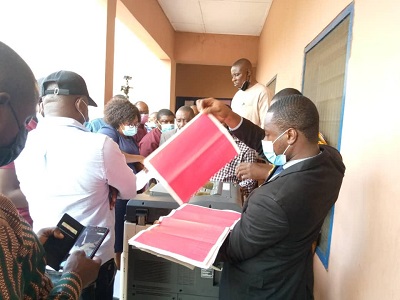 The National Democratic Congress (NDC) is questioning the authenticity of the pink sheets presented by the Electoral Commission (EC) in the ongoing Techiman South election petition case.

Christopher Beyere Baasongti, the NDC’s parliamentary candidate for Techiman South in last year’s election, is in court challenging the results of the constituency’s parliamentary polls, in which the New Patriotic Party’s Martin Agyei-Mensah Korsah was declared the winner.

The EC was last week instructed by the Wenchi High Court to provide the original pink sheets of the 2020 parliamentary elections held in the Techiman South constituency to the NDC parliamentary candidate by 2 pm on April 19, 2021, for inspection.

Although the electoral body complied with the court’s order, the Bono East Regional Secretary of the NDC, Shamsudeen Ali, in a Citi News interview said the leadership of the party, after going through the documents, believes the pink sheets have been doctored.

In his suit filed at the High Court in Wenchi, Christopher Bayere wants the declaration of Mr. Adjei-Mensah Korsah as the winner of the parliamentary elections to be quashed

Again, he wants the court to order the EC to declare him as the winner of the elections.