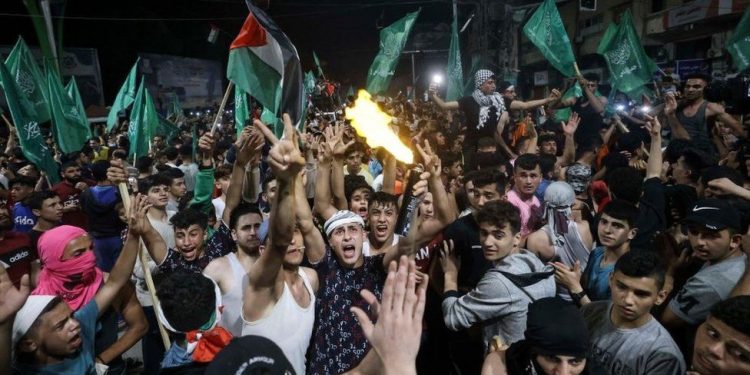 A ceasefire between Israel and the Palestinian militant group Hamas has come into effect.

The ceasefire began early on Friday, bringing to an end 11 days of bombardment in which more than 240 people have died, most of them in Gaza.

Palestinians poured on to the streets of Gaza soon after the truce began, while a Hamas official warned that its hands “are on the trigger”.

Both Israel and Hamas have claimed victory in the conflict.

On Thursday, more than 100 Israeli airstrikes targeted Hamas infrastructure in the north of Gaza. Militants launched more than 300 rockets towards Israel during the day, the Israeli military said.

Fighting began in Gaza on 10 May after weeks of rising Israeli-Palestinian tension in occupied East Jerusalem that culminated in clashes at a holy site revered by both Muslims and Jews. Hamas began firing rockets after warning Israel to withdraw from the site, triggering retaliatory airstrikes.

At least 232 people, including more than 100 women and children, have been killed in Gaza, according to its health ministry. Israel has said at least 150 militants are among those killed in Gaza. Hamas does not give casualty figures for fighters.

In Israel 12 people, including two children, have been killed, its medical service says. Israel says some 4,000 rockets have been fired towards its territory by militants in Gaza.

What have the two sides said?

The Israeli Political Security Cabinet said it had “unanimously accepted the recommendation” for a ceasefire.

“The political leaders emphasised that the reality on the ground will determine the future of the campaign,” the statement said.

A Hamas official told the Associated Press news agency that the ceasefire announced by Israel amounts to a “victory” for the Palestinian people and a defeat for Israeli Prime Minister Benjamin Netanyahu.

Soon after the ceasefire started at 02:00 on Friday (23:00 GMT Thursday), large numbers of Palestinians took to the streets of Gaza in cars and on foot to celebrate.

Loudspeakers from mosques pronounced “the victory of the resistance achieved over the Occupation during the ‘Sword of Jerusalem’ battle”.

But Basem Naim, from the Hamas Council on International Relations, told the BBC he was sceptical about whether the truce would last.

“Without justice for Palestinians, without stopping the Israeli aggression and Israeli atrocities against our people in Jerusalem, the ceasefire will continue to be fragile,” he said.

A member of Hamas’s political bureau, Ezzat al-Reshiq, issued a warning to Israel.

“It’s true that the battle ends today but Netanyahu and the whole world should know that our hands are on the trigger and we will continue to ramp up the capabilities of this resistance,” he told the Reuters news agency.

“We tell Netanyahu and his army, if you come back, we will come back.”

Survivors are not claiming victory

Just as in the other wars since Hamas took over in Gaza in 2007, the two sides are claiming victory.

A senior Hamas leader told the BBC in Gaza that Israel had promised to “lift their hand off Sheikh Jarrah and Al-Aqsa Mosque”. He was referring to one of Islam’s holiest mosques and the Jerusalem district which became a flashpoint during an attempt to evict Palestinian families from their homes.

Israel denied there was any such understanding. Benny Gantz, the defence minister, issued a statement saying that after the past 11 days Israel can show military achievements “unprecedented in their scale and strategic significance for the struggle with terrorist organisations in Gaza”.

On both sides survivors and the bereaved from missiles and bombs are not claiming victory. By far the majority of the dead and injured are Palestinians in Gaza, which also suffered hundreds of millions of dollars of physical damage.

Both sides have also been crafting what is referred here sometimes as victory narratives.

It is the fourth big war between Israel and Hamas since the first one back in the end of 2008 and after each of those encounters, and all the smaller ones in between, similar things have been said by both sides in claiming victory and then essentially the seeds of the next conflict are sown. I can tell you one thing for certain – that if the status quo does not change favourably, there will be another round of this.

US President Joe Biden said he commended Mr Netanyahu in a phone call after the ceasefire agreement was announced.

He said the US – Israel’s closest and most important ally – fully supports the country’s “right to defend itself against indiscriminate rocket attacks from Hamas and other Gaza-based terrorist groups that have taken the lives of innocent victims”.

Mr Biden added that the Israeli prime minister shared his appreciation for Israel’s US-backed defence system, known as the Iron Dome, “which our nations developed together and which has saved the lives of countless Israeli citizens – both Arab and Jew”.

He also praised Egypt’s President Abdel Fattah al-Sisi for brokering the ceasefire, before turning to the human cost of the conflict.

“I send my sincere condolences to all the families, Israeli and Palestinian, who have lost loved ones and my hope for a full recovery for the wounded,” he said.

The president said the US “remains committed to working with the United Nations” in providing humanitarian assistance to Gaza and in reconstruction efforts in the enclave. He added that this would be done “in full partnership with the Palestinian Authority, not Hamas”.

President Sisi said he had received Mr Biden’s phone call with “utter happiness”, adding that they “exchanged visions around reaching a formula that would calm the current conflict between Israel and Gaza”.

Timeline: How the violence escalated

The worst violence in years between Israel and the Palestinian territory of the Gaza Strip has seen dozens killed. It follows a month of spiralling tensions before open conflict broke out. Here is what happened in the lead-up to the fighting.

Clashes erupt in East Jerusalem between Palestinians and Israeli police.

Palestinians are angry over barriers that had been placed outside the Damascus Gate entrance to the Jerusalem‘s Old City preventing them from gathering thereafter prayers at the Old City’s al-Aqsa Mosque on what is the first night of the Islamic holy month of Ramadan.

Palestinian discontent had been stoked earlier in the day when President Mahmoud Abbas called off planned elections, implicitly blaming Israel over voting arrangements for Palestinians in East Jerusalem.

Hamas – Mr Abbas’ Islamist rivals who control Gaza and were running in the elections – react angrily to the postponement.

Rockets are fired from Gaza at Israel, which responds with air strikes after a relative period of calm between Israel and the Palestinian enclave.

Clashes spread to the mixed Arab-Jewish port city of Jaffa, next to Tel Aviv.

In Jerusalem, Jewish youths, angry over a spate of filmed assaults by Palestinians on Orthodox Jews posted on the TikTok video-sharing app, attack Arabs and chant anti-Arab slogans.

Hundreds of ultra-nationalist Jews shouting “Death to Arabs” march towards Damascus Gate in protest at the Arab assaults on Jews. Clashes erupt at the site between Palestinians and police trying to separate the two groups, injuring dozens of people.

Violence between Arabs and Jews spreads to other parts of the city.

President Abbas’ Fatah faction and Hamas condemn the looming threatened eviction of Palestinian families from their homes in the Sheikh Jarrah district of East Jerusalem by Jewish settlers ahead of a planned court hearing. Hamas calls on Arabs to form “human shields of resistance” there.

In the days that follow, police and protesters repeatedly clash at the site as it becomes a focal point for Palestinian anger.

Two Palestinian gunmen are shot dead and a third is wounded after opening fire on Israeli security forces in the northern West Bank. Israeli authorities say the group planned to carry out a “major attack” in Israel.

Later on after Friday prayers – the last of Ramadan – major clashes erupt at the al-Aqsa mosque compound, injuring more than 200 people. Israel’s police force says it used “riot dispersal means”, firing rubber bullets and stun grenades after officers came under a hail of stones and bottles.

A second night of violence erupts in East Jerusalem after tens of thousands of worshippers prayed at the al-Aqsa mosque for Laylat al-Qadr, the holiest night of Ramadan.

More than 120 Palestinians and some 17 police are injured.

Israel’s Supreme Court postpones the hearing on the Sheikh Jarrah case following calls to delay it because of the growing unrest. Tensions remain high though and more clashes take place between Israeli police and Palestinians in Sheikh Jarrah and at Damascus Gate.

Early morning clashes break out between police and Palestinians at the al-Aqsa mosque compound, where crowds throw stones and officers fire stun grenades.

Palestinian anger has been inflamed by an annual Jerusalem Day march planned for later in the day by hundreds of Israeli nationalists to celebrate Israel’s capture of East Jerusalem in 1967.

The march is due to pass through predominantly Arab parts of the Old City in what is seen by Palestinians as a deliberate provocation. It is rerouted at the 11th hour, but the atmosphere remains volatile with more than 300 Palestinians and some 21 police injured in the violence at the holy site.

Hamas issues an ultimatum to Israel to “withdraw its soldiers… from the blessed al-Aqsa mosque and Sheikh Jarrah” by 18:00. When the deadline passes without an Israeli response, rockets are fired towards Jerusalem for the first time in years.

A continuing exchange of rocket-fire and air strikes quickly escalates into the fiercest hostilities between the two sides since they fought a war in 2014.