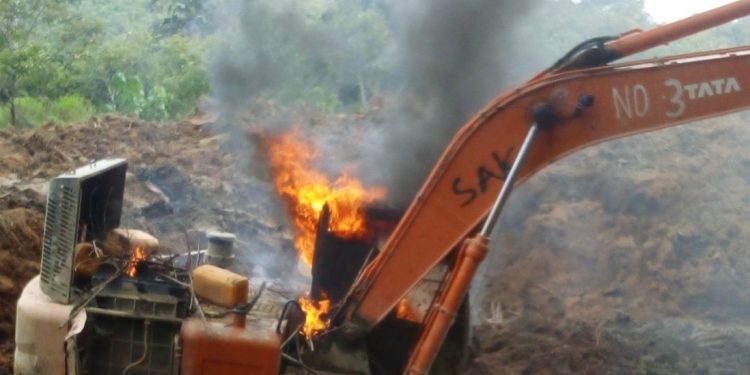 The District Chief Executive of Mpohor, Asaah Mensah, on Thursday, May 27, 2021, handed over three suspected illegal miners arrested at Nsuogya to the Western Regional Police Command.

According to the DCE, they were mining on the banks of River Subri in the Mpohor District.

Speaking to Citi News, the DCE of Mpohor, who mobilized local residents to arrest the three, stated that the perpetrators were more than 10 in number, but they only managed to arrest three.

He said upon the instructions of the Western Regional Minister, they burnt an excavator used by the miners, and confiscated their Nissan Navara Pickup, together with other items.

“Since the directive from my Regional Minister to ensure that all the galamsey operators mining in the river should be stopped, I engaged the communities closer to the rivers within my district, so this has made members of the community very alert and sensitive to the situation, and they give me hints whenever they see some of these unscrupulous people in the river.”

“So this [Thursday] morning, someone hinted at seeing one of the miners at the banks of river Subri at Nsuogya, and we went there, and were able to arrest three, but the rest of them escaped. We also saw an excavator digging the sand at the banks and per the directives of the Regional Minister, we burnt it. We seized the vehicle, they came to the river with, as well as some of their tools and machines,” he added.

The DCE said they have picked information about the leader of the team and will go after him.