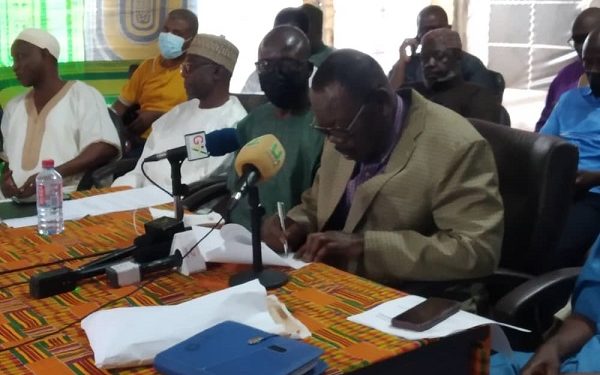 The Ghana Hajj Board and the Ghana Hajj Agents have announced the cancellation of the Hajj for Ghanaian pilgrims for the second year in a row.

This follows a decision by the government of Saudi Arabia to restrict the annual pilgrimage this year to its citizens, residents and a maximum of 60,000 pilgrims in response to the coronavirus pandemic.

“In light of the June 12, 2021 announcement by the Saudi Government’s Ministry of Hajj and Umrah Affairs, that Hajj 2021 is cancelled for International pilgrims, we have collectively, per our last joint communiqué met to agree on the following,” Sheikh I.C. Quaye said on Sunday at a press briefing in Accra.

He also stated that pilgrims who paid their fares to the Hajj Board via their agents are to apply for their refunds through their agents.

On his part, Alhaji Suleiman said the refund would be given to the prospective pilgrims through their respective agents as soon as the verification process is completed.

He said the agents have a system in place to effect the payments only after receiving a formal request.

According to him, the decision by the Ministry of Hajj and Umrah Affairs of Saudi Arabia to cancel the Hajj was not surprising, given that it would have been very difficult to control the crowds and socially-distance pilgrims.

“The fact that the decision was delayed kept all of us thinking that the Hajj will not come on. It wasn’t strange at all because the COVID is still being fought by the whole world, and looking at social distancing, I knew it could not happen with pilgrims converging on the same place for the same rituals; and therefore, it didn’t take me by surprise”.

Sheikh I.C. Quaye further clarified that pilgrims who wish to retain their deposits with the Hajj Board or via the Hajj Board through their agents would be exempted from paying any increment in the Hajj fare for 2022.

“The Hajj Board will ensure that all monies paid by pilgrims directly to the Hajj Board or via their agents for 2020 Hajj, will be paid in full per the above arrangements,” he said.

Sheikh I.C. Quaye assured that if there was an increment to the Hajj fare in 2022, the Hajj Board would pay the difference on compassionate grounds.

Last year, only 10,000 Muslim residents of Saudi Arabia itself were allowed to take part in the Hajj. The figure was far less than the 2.5 million Muslims from around the world who participated in 2019.

The restrictions were a result of the COVID-19 pandemic, and it affected about 2,500 prospective pilgrims from Ghana who had paid about GH¢50 million to the board as the fare for last year’s Hajj.

Puma Energy drops its fuel price to GHS5.99 per litre