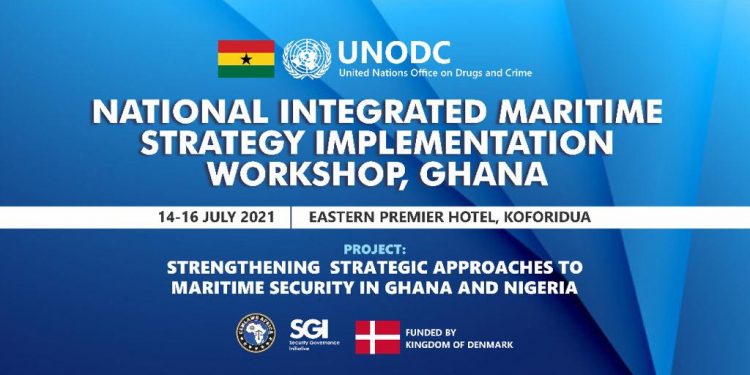 The three-day workshop is being organised by the Centre for Maritime Law and Security Africa (CEMLAWS Africa) in collaboration with the United Nations Office on Drugs and Crime (UNODC), the Ministry of National Security, Ghana and Security Governance Initiative (SGI).

It is aimed at coming up with a cogent and action-oriented implementation plan for the National Integrated Maritime Strategy.

The workshop is funded by the Kingdom of Denmark with technical support from the United Nations Office on Drugs and Crime (UNODC).

While giving his opening remarks no Wednesday, the Chairman of the Workshop, Dickson Osei-Bonsu Esq, Director, Legal at the Ministry of National Security and Coordinator of the Security Governance Initiative (SGI) intimated the importance of an implementation strategy in advancing the ideals of the National Integrated Maritime Strategy.

In his remarks, he emphasised the need for stakeholders to look at the National Integrated Maritime Strategy in a broader perspective where issues of the blue economy, marine spatial planning, protection and conservation of the marine environment, oil and gas exploration, and indeed many other issues with regard to Ghana’s maritime domain can be addressed.

A further assertion of this point was made when the Special Guest of Honour, Major Gen. Francis Adu Amanfoh Rtd, National Security Coordinator, stressed the need for a clear path-way in terms of a cogent and strategic plan to be established for the National Integrated Maritime Strategy.

In his address, Maj. Gen. Adu Amanfoh Rtd, emphasised the need for interagency coordination if Ghana is to thoroughly administer the strategic objectives of the National Integration Maritime Strategy.

He reckoned that a thriving blue economy cannot be achieved with a shroud of insecurity over Ghana’s maritime domain.

Other persons who were at the workshop included, Chief of the Naval Staff, Rear Admiral Issah Yakubu; Chief of Air Staff, Air Vice-Marshal Frank Hanson; the Chairperson of the National Commission for Civic Education, Josephine Nkrumah; and Anais Rios, UNODC Representative.

With over 25% of Ghanaians dwelling directly in coastal communities and more than 50% living within a 50km radius of the coast, it has become imperative for stakeholders and ultimately government to look more at the development of Ghana’s blue economy expanse – which cannot be critically looked at without addressing the issues of security.

The conference, which ends on Friday, July 16, 2021, is expected to contribute significantly to shaping the opportunities and prospects of Ghana’s maritime domain.

1.6 billion vaccines to be rolled out from now to 2022 – AstraZeneca Africa Director