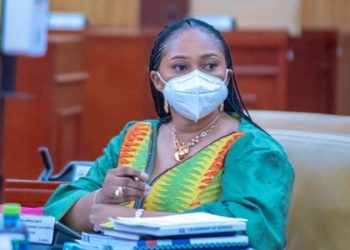 The Minister for Gender Children and Social Protection, Sarah Adwoa Safo says her ministry is working with key law enforcement agencies to address the issue of child abduction in the country.

She made this known while answering questions in Parliament on Thursday, July 29, 2021.

The question was posed by Keta MP, Kwame Dzudorli Gakpey who wanted to know what steps the Ministry was taking to eliminate or minimize the growing incidents of child abduction in the country.

Sarah Adwoa Safo in her response said her outfit has also heightened its sensitization efforts to address the situation and have so far reached about 34,000 with its campaign.

“We have, through Regional and National Child Protection Committees carried out community sensitization programmes on child protection, including abduction at the community level in partnership with the Local Government Service and Non-Governmental Organizations. So far, 34,000 people have been sensitized through our face-to-face interactions on child protection issues and 2.4 million people have been reached on our social media platforms,” she said.

She added that, “We are also collaborating with key law enforcement agencies and have organized training sessions to improve prosecutions and convictions of perpetrators. We have also launched a software called the Social Welfare Information Management Systems (SWIMS) to facilitate and enhance collaboration among relevant stakeholders at the National and Decentralized levels in the management of Social Welfare cases, which also include child protection. The implementation of it will facilitate the arrest and prosecution of perpetrators. We are again in the process of amending the Children’s Act and the Juvenile Justice Act to provide for more stringent measures.”

Answering a question on what the ministry was doing to addressing the rising cases of domestic violence among women and girls, Adwoa Safo said two toll-free hotlines for reporting of all social protection issues including domestic violence cases.

“We are carrying out community sensitizations at the community level against domestic violence. This is being done in partnership with our partners, including the traditional and opinion leaders. We have importantly set up two toll-free hotlines of hope for reporting of all social protection issues, including domestic violence cases. The hotlines are 0800800800 and 0800900900. We also set up the BOAME APP which is called the Orange Centre specifically for domestic violence cases. The number is 0800111222. The lines are fully active to receive calls to support victims and vulnerable groups. We have also renovated the domestic violence shelter where we provide accommodation, care and support to victims. Our ministry also works closely with DOVVSU for the prosecution of the perpetrators.”