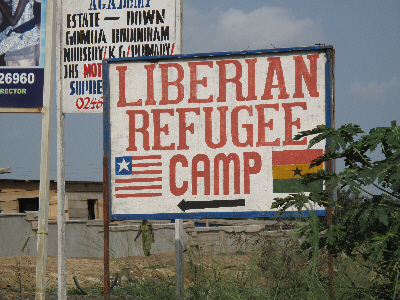 The demolition of portions of the Budumburam Refugees Camp in the Central Region is expected to commence today, Thursday, September 30, 2021.

The exercise is to be undertaken by the Gomoa East Assembly.

However, the residents have in the past few days protested the move to have them relocated.

Some of them clad in red and black attire besieged the Gomoa Buduburam Police Station on Tuesday, September 28, 2021, to protest the scheduled exercise.

The residents, some of whom have moved out, lament that hundreds of people will be displaced if the demolition of structures on the 141-acre land is allowed to go on.

Some residents who spoke to Citi News ahead of today’s exercise urged the government to reconsider its decision.

One of the persons to be affected said, “Things are difficult these days so it will be unfortunate for us to be evicted from this place. Not everyone here is a sex worker because me for instance, I stay here with my husband. So we are pleading with the authorities to allow us to stay here because we have nowhere to go.”

“We have gone as far as writing a letter to the Speaker of Parliament, the Interior Ministry, Ghana Refugees Board, and others, and until now, none of them has responded to us. So we just feel that maybe the government feels that we are not human beings and not important,” another person also said.

About the Buduburam camp

The Buduburam enclave, which used to host mainly Liberians who sought asylum in Ghana during the unrest in that country, is now hosting other foreign nationals from Nigeria, Senegal, Ivory Coast, and some Ghanaians.

It became the home of Liberian refugees after it was opened by the United Nations High Commissioner for Refugees (UNHCR) in 1990. It was initially home to some 12,000 refugees.

I want Mahama’s comeback in 2024; we’ll police the ballot – Haruna

I want Mahama's comeback in 2024; we'll police the ballot - Haruna