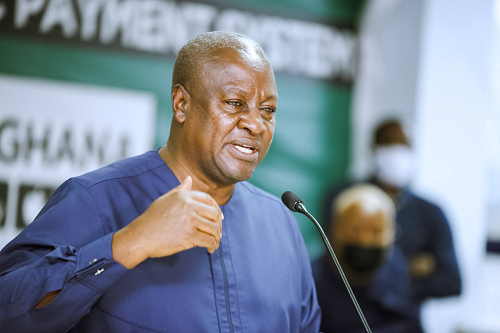 Former President and the National Democratic Congress (NDC) flagbearer for the 2020 general elections, John Mahama has asked the Electoral Commission to work towards redeeming its image in the next general elections in 2024.

Mahama said the Electoral Commission under the leadership of Jean Mensa superintended over the country’s worst elections in 2020 and so will have to work hard to repair the poor image it has created for itself.

Speaking in an interview with Volta Region-based Global FM, as part of his ‘Thank You Tour’ of the region, John Mahama expressed regret that the EC appears to have taken a stance against the NDC, although it is expected to be neutral.

“During the Ayawaso West Wuogon violence probe, they asked her [Jean Mensa] about violence in the election, and she said they didn’t see any violence. She has a mindset towards rigging the election against the NDC. You have an EC Commission who says the NDC is an existential threat to Ghana’s democracy, and yet she is still at the Commission and making decisions with respect to fair elections.”

“They conducted one of the worst elections [in 2020]. I don’t have the power to remove them, and it is likely that they will be the EC commissioners for 2024. They should use 2024 to redeem themselves,” he added.

John Mahama further disclosed that the NDC is continuing with its stakeholder engagements on its electoral reform proposals ahead of the 2024 elections.

“We set up a committee to come up with proposed electoral reforms. We came up with proposals which we have presented to the EC, and we have done some activations. We’ve met the religious groups and various groups and trying to explain to them why if these proposals are carried out, it will lead to a better electoral outcome in Ghana than we’ve seen in the past,” Mahama said.

The 4Ps of International Student Recruitment – A Rwandan Perspective [Article]