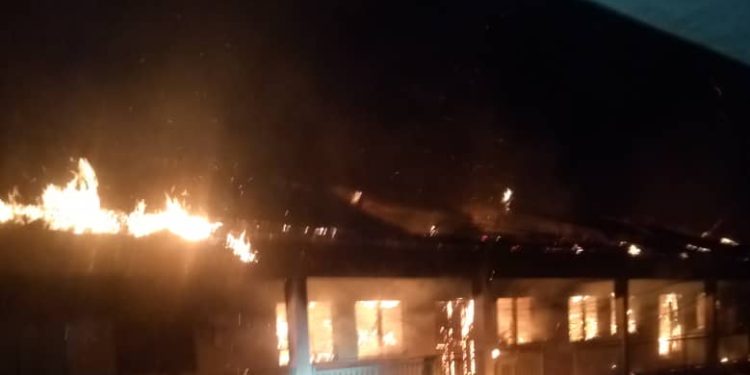 The entire boys’ dormitory block A of the Nhyinahin Catholic Senior High School in the Atwima Mponua District of the Ashanti Region has been gutted by fire.

The early intervention by firefighters prevented the fire from spreading to other blocks.

Officers from the Ghana National Fire Service say there were no casualties.

However, one firefighter was allegedly assaulted by some unknown persons as he was working to bring the situation under control.

Although the immediate cause of the fire is not yet known, the officers from the Ghana National Fire Service say they picked intelligence a few days ago that some students were planning to set fire into the building.

He also narrated the approach they employed in dousing the fire.

“We had a distress call at 9:30 pm last night that there was a fire outbreak at Nhyinahin Catholic Senior High School. So we quickly dispatched the Nhyinahin fire tender to the school, and it took us about five minutes to get there.”

“Upon arrival, we realized that fire has engulfed the boys’ dormitory block A and the fire was all over and spreading widely and very fast in all the six rooms in that particular block, and in order to prevent the fire from the further spread, we defensively and offensively tackled the fire, and we brought it under control at exactly 11:27 pm, and then eventually succeeded in dousing the fire completely at exactly 12:23 pm.”

He also disclosed that one of the GNFS personnel was attacked by an unidentified person, but was later taken to the hospital for treatment.

“No casualties were recorded in the incident, just that one of our personnel got attacked by an unidentified person, and we had to ensure he was taken to the hospital, but has since been discharged and is doing well.”