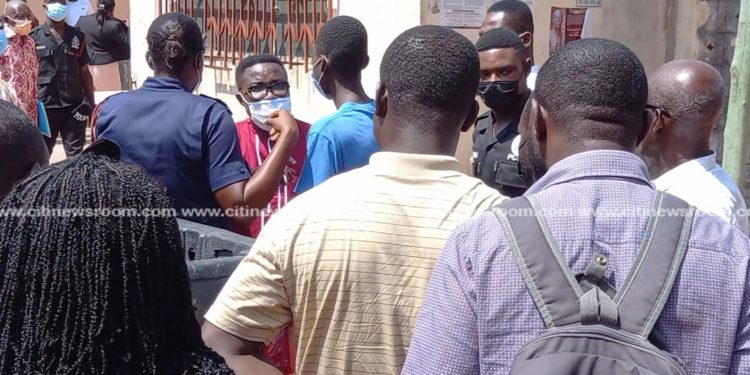 Simpson was picked up on November 1, 2021, on charges of publishing false news with the intent of causing fear and alarm to the public contrary to the Public Order Act, and false publication of news through an electronic device contrary to the Electronic Communications Act, 775 of 2008.

The arrest followed a call-in by one Stephen Kumi into a radio programme, who claimed that his girlfriend had been kidnapped.

Police subsequently insisted that the claim was a hoax and dragged the journalist and Mr. Kumi to court, where they were remanded last week for two weeks.

Although Simpson was granted bail by a High Court in Takoradi on Monday, November 8, 2021, following an appeal, Kumi is still on remand and in police custody.

Below is a full statement from MFWA:

The Media Foundation for West Africa (MFWA) is highly disappointed by the decision of the Takoradi High Court to remand journalist Nhyiraba Paa Kwesi Simpson into custody for allegedly publishing fake news. The MFWA is alarmed that the journalist’s rights might be abused needlessly.

Simpson was arrested on November 1, 2021, on charges of publishing false news with the intent of causing fear and alarm to the public contrary to the Public Order Act, and false publication of news through an electronic device contrary to the Electronic Communications Act, 775 of 2008.

The arrest followed a call-in by Stephen Kumi, who claimed that his girlfriend had been kidnapped during the morning programme hosted by the award-winning journalist on Connect FM on November 1. The police said its investigations into that kidnap claim showed it was a hoax and proceeded to arrest Kumi who was denied bail alongside Simpson.

The court remanded the journalist despite his “not guilty” plea and his counsel’s argument that he must be seen as a journalist doing his work.

In a press release dated November 5, 2021, the Management of Media General, operators of Connect FM, asked that “Simpson is not victimised as he was only doing his work as a journalist and had no control over the information by the caller….”

The General Manager of Media General Michael Oti Adjei, in a social media messaging chat with the MFWA, said Simpson is a highly professional journalist who has won several awards for his ethical and problem-solving journalism that has contributed to the development of Takoradi. Against, this background, Oti Adjei said “It’s unfortunate that the police have interpreted this as a deliberate attempt to publish a hoax kidnap story.”

The Media Foundation for West Africa is deeply concerned about the arrest and detention of Paa Kwesi Simpson and his subsequent committal to custody by the Takoradi High Court. In the first place, the journalist could not have predicted and filtered what the caller, Stephen Kumi, was going to say. He could only have been an accomplice if he endorsed or validated the claim, which was not the case.

It is our view that the presenter can at worst be considered a witness helping the police to investigate the claim made by the caller. To hold him as an accomplice is to ignore the fact that he is a journalist doing his work of informing his audience and providing a platform for feedback, some of which might be wayward, as Kumi’s apparently turned out to be.

We share the view of the Management of Media General that, as an award-winning journalist who has always demonstrated professionalism, Paa Kwesi must be given the benefit of the doubt until it is proven that he conspired with Kumi or knowingly allowed him to spread what they both knew to be false news. It took the police some investigation to establish that the caller’s claim was false. How did they expect the radio presenter to have instantly known that that caller was making up his story? Are we establishing a precedent that a radio presenter bears automatic vicarious liability for the false remarks of a caller, even if it requires a later probe to establish the falsity of those remarks?

Much as we appreciate the effort of the security agencies to clamp down on the recent phenomenon of false kidnapping claims, we find its treatment of Paa Kwesi Simpson as unfortunate. The detention of the presenter could have a chilling effect on himself and other journalists. We find his situation untenable and are concerned that, if he is eventually exonerated, which we are hopeful he will, his rights would have been abused beyond remedy. This scenario, we believe, was quite avoidable.