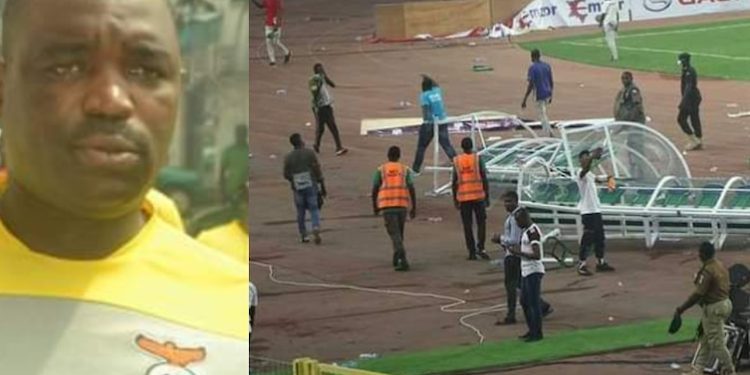 The Ghana Football Association’s Head of Communication, Henry Asante Twum, has recounted how the tragic death of the CAF official, Dr. Joseph Kabungo, who was responsible for conducting doping tests, occurred during the second leg of the Ghana – Nigeria World Cup Playoffs at the Mooshod Abiola National Stadium in Nigeria.

According to him, he witnessed the incident  around the Ghana team dressing room, after the CAF official was about to conduct a doping test on one of the Ghana players.

Ghana qualified for the 2022 World Cup qualifier on the away goal rule in 1-1 drawn game against Nigeria at the Mooshod Abiola Stadium.

The fans of the Nigeria team began vandalizing the stadium in protest of their team’s performance. Some were seen on camera hurling stones, bottles and other missiles in the direction of both teams’ players and officials.

The ensuing violence led to the use of teargas by the Nigeria security to disperse the angry fans who had invaded the pitch.

It is however unclear if Dr. Joseph Kabungo’s death is directly linked to the violence that erupted after the game, since CAF is suggesting he may have died from a heart attack.

“The man came to knock on our dressing room door. He came to call Alexander Djiku … We saw him. Myself the team doctor and the physio.”

“He went off in our presence. We didn’t even exit the space we were in, it was just about the time he got into the exit point where the man collapsed. So the test didn’t even happen.” he added.

'Their job is done, we'll decide on their future' - GFA on Otto Addo, technical team members