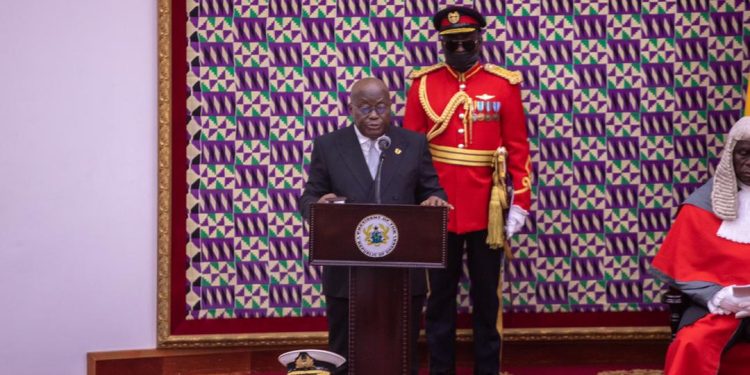 President Akufo-Addo has admitted for the first time that the timeline given by his government for the construction of all hospitals under the government’s Agenda 111 project, was overly ambitious.

The President, who said this in parliament on Wednesday, March 30, 2022, when he delivered the State of the Nation Address, said the projects will be completed before January 7, 2025.

In August 2021, President Akufo-Addo cut sod in the Ashanti Region to signal the beginning of the hospital projects, which were scheduled to be completed in 18 months across the country.

But the President says the initial schedule given for the completion was overly ambitious.

“Agenda 111 is an ambitious project, which must and will be done, and which will create some 33,900 jobs for construction workers, and, on completion, some 34,300 jobs for health workers.”

“Mr. Speaker, I have to report that, like all major construction projects, it is evident that the initial schedule we gave for the completion of Agenda 111 was overly ambitious. Identifying suitable sites around the country, for example, has turned out to be even more problematic than had been anticipated. I am able to say that a great deal of the preparatory work has now been completed, and work has started at 87 of the 111 sites. I have been assured that preliminary work on the remaining 24 sites is ongoing,” he added.

He further stressed that the government has every intention of seeing the project through to a successful end, which will enable him to commission all the 111 hospitals before he leaves office on 7th January 2025.

“Mr. Speaker, we have saved lives and fared much better than we had feared, and the experts predicted, but the consequences of lockdowns, border and business closures, and unplanned expenditures have combined to have a devastating impact on our economy.”

The President also said the economic devastation of COVID has, since the beginning of this year, been further aggravated by the Russian invasion of Ukraine, which has worsened the economic outlook of the entire world.

“We, in Ghana, have not escaped this development, and the consequences are being felt in rising living costs at our markets and at fuel stations” he added.

He noted that government remains alive to its responsibilities to the Ghanaian people.

“The difficulties of the time notwithstanding, we intend to continue to grow this economy and bring prosperity. That will only happen when we continue to invest in the future,” he added.

The Agenda 111 project is part of a grand vision for Ghana’s healthcare sector by the Akufo-Addo administration.

The project will ensure that 101 outstanding districts will be provided with hospitals in addition to 10 selected regional and specialized hospitals.

The government has already set aside an amount of US$100 million as commencement funding for the project.