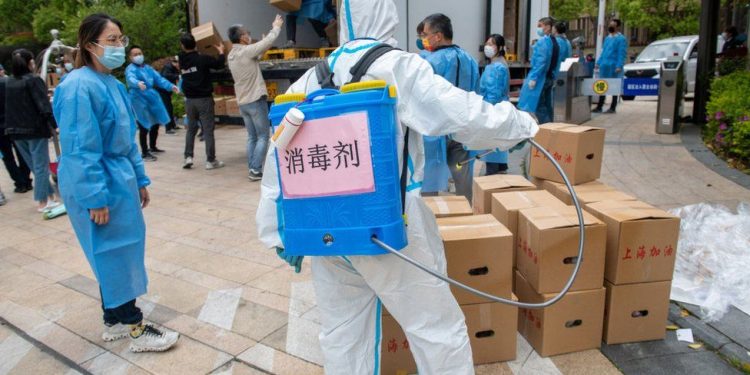 Authorities in Shanghai have said they will tighten the enforcement of lockdown measures, as a Covid surge continues in China’s financial capital.

New measures include placing electronic door alarms to prevent those infected from leaving, as well as evacuating people to disinfect their homes.

Earlier this week, hundreds were forcibly evacuated from their homes to allow for buildings to be disinfected.

The restrictions will take Shanghai’s lockdown into its fifth week.

In addition, disinfection measures will be escalated in some of the city’s worst-hit areas. This will likely mean some residents will be forced to move out temporarily – including those who have tested negative.

The move comes days after people in two other Shanghai communities – Beicai and Pingwang – were ordered to leave their residences for temporary accommodations.

In Beicai, an official notice issued to residents told them to pack their belongings and leave their wardrobe doors open.

They were also told to leave open the front door of their home and their pets behind. Images on social media of people queuing with packed suitcases at night-time showed the scale of the operation.

In the worst hit areas, people’s homes will be disinfected. This will likely mean some residents are forced to move out temporarily, even those who’ve tested negative.

We can make this assertion because earlier this week the BBC reported on the mass evacuation and forced removal of hundreds of people from their homes in at least two areas of the city, to allow for mass cleansing.

Shanghai city officials also re-iterated something that remains crucial – that all infected patients and close contacts should be transferred to government-run centralised quarantine centres. They want people discharged sooner, once they are negative.

But as the Party mouthpiece People’s Daily newspaper said on its front page last week, “persistence is victory”.

The latest measures signals the lengths to which Chinese authorities are willing to go to stop the spread of Covid in Shanghai – regarded as the country’s financial and business hub.

Some in locked-down areas of the city have been struggling to access food supplies, and forced to wait for government drop-offs of vegetables, meat and eggs.

The lockdown extension has overwhelmed delivery services, grocery shop websites and even the distribution of government supplies.

Officials are still trying to maintain the country’s zero-Covid strategy which prioritises eliminating the virus over living with it as many countries have now chosen to do.

But the increased transmissibility and milder nature of the Omicron variant has led to questions over whether the current strategy is sustainable in the long run.

The latest outbreak in Shanghai, first detected in late March, has seen more than 400,000 cases recorded so far and 36 deaths. Nearly all were elderly, unvaccinated residents with underlying health problems, according to Chinese officials.

As a result, the city’s 25 million people have been ordered to stay home.