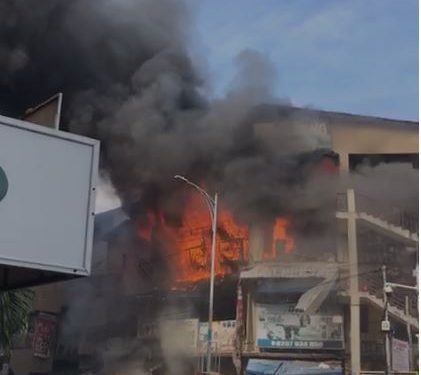 The Ghana National Fire Service is cautioning individuals to desist from putting up structures on fire hydrants.

It gave the warning following a fire that gutted several stores at Opera Square in the Central Business District of Accra.

According to the Fire Service, it has many fire hydrants sited across the city, a number of which are in the Central Business District, but private individuals have put up structures on them while some have been covered with refuse.

It said the situation continues to hamper their efforts to quickly douse fires when they occur.

A fire hydrant is a fitting in a street or other public place with a nozzle by which a fire hose may be attached to water for use by firefighters in cases of emergencies.

An officer with the Public Affairs Department of the Ghana National Fire Service, ADO2 Alex King Nartey, told Citi News that the blockage of fire hydrants is one of their major challenges in battling fires in the country.

“Our hydrants are the easiest way to fight fires. In markets like this (CBD), people build their shops on hydrants. People block these hydrants. We have them, but often they are not flowing, and people have their shops already on them. Sometimes there is rubbish in them, so we call on people to desist from such habits so that where there is fire, we can better serve them.”

Fire on Thursday gutted a wholesale shop, MOOVED Home Appliances at Opera Square in Accra, opposite  Melcom in the Central Business District.

Items such as bags, shoes, televisions, and other home appliances were burnt to ashes.

The fire, which was reported to have started around 4:00 pm, spread to other adjoining shops and took several hours to be brought under control.