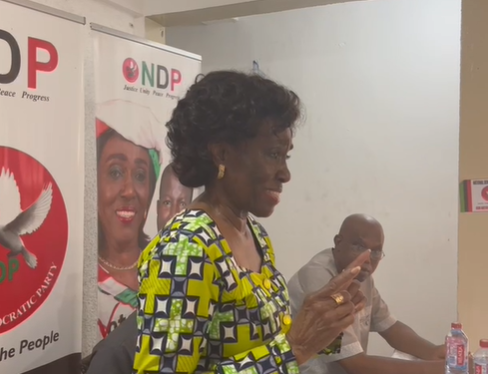 The founder and leader of the National Democratic Party (NDP) Nana Konadu Agyemang Rawlings has called for an amendment of the 1992 constitution to ensure proper checks and balances within government structures.

The former First Lady said the section of the constitution that allows the President to elect members of Parliament as Ministers, thus making them part of the executive arm of government is flawed.

According to her, this practice defies the concept of separation of powers.

There have been several calls for a review of the 1992 constitution by some Ghanaians and Civil Society Organisations.

Addressing the media and executives of the NDP at the party’s head office in Accra today, Nana Kunadu Agyemang Rawlings called for urgent reforms to be made to Ghana’s constitution.

“You cannot have people of Parliament becoming Ministers, so I remember writing a memo to the group putting out the constitution. I got insults. But common sense tells me that you cannot mix the two. One should be independent of the other, so you can check each other and make sure things are being done right,” she explained.

The Constitution Review Commission was set up in January 2010 to consult with the people of Ghana on the operation of the 1992 Constitution, and on any amendment that needed to be made to the Constitution.

The Commission was also tasked to present a draft bill for the amendment of the Constitution in the event that any changes were warranted.

However, the recommendations of the Commission have not been implemented years after the report was presented to the appropriate quarters.