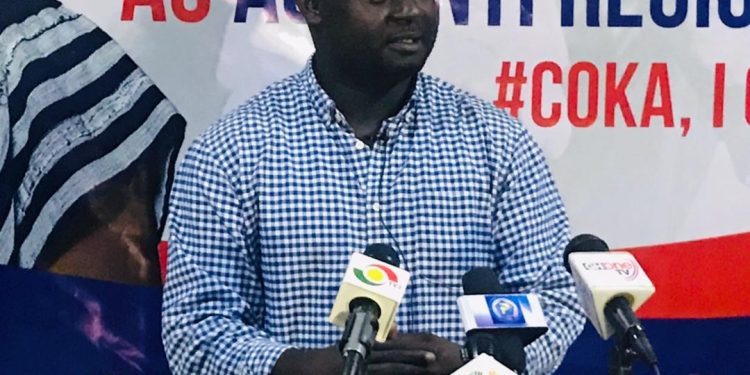 The Campaign team of an aspirant in the Ashanti Regional Chairmanship race of the New Patriotic Party (NPP) has called for fairness in the compilation of the album to be used for the party’s upcoming Regional Delegates Conference.

The team of the aspirant, Chairman Odeneho Kwaku Appiah, also called COKA, said the party should ensure that only legitimate and rightful persons are included on the album that will be used for the elections on Friday.

The team indicated that it has picked up intelligence that the names of non-tertiary students are allegedly being infiltrated into the album through the Tertiary Students Confederacy, TESCON, a student wing of the NPP.

A campaign team member for COKA, Keskin Owusu Poku, insisted that the right album must be used to make the upcoming polls free and fair for all.

“We also have some concerns regarding the constituencies that still have their appointments hanging in the balance. There are constituencies where there is some kind of disagreement on who gets appointed. We want to ensure that nobody is forced into the album through the backdoor. The same applies to the TESCON list. We have heard stories that they have brought in a whole new set of people and in some cases, these people do not even attend school at the various tertiary institutions where they are supposed to be the representatives of TESCON.”

“When any candidate goes out, the candidate meets the TESCON Presidents, so on what basis will anybody try to present different names outside the TESCON list? And even if the constitution talks about a rep of TESCON, we believe that it does not lie within the powers of anybody among the regional executives to be the one to determine who represents TESCON. It should be the TESCON executives themselves who should decide that.”

He further said the team was waiting for the album to do an individual verification of persons on the album, emphasizing “that is the only panacea to having free and fair elections.

Mr. Owusu Poku is hopeful the aspirant, Odeneho Kwaku Appiah will win the elections as the Chairman but insisted the process must be free, fair, and transparent.