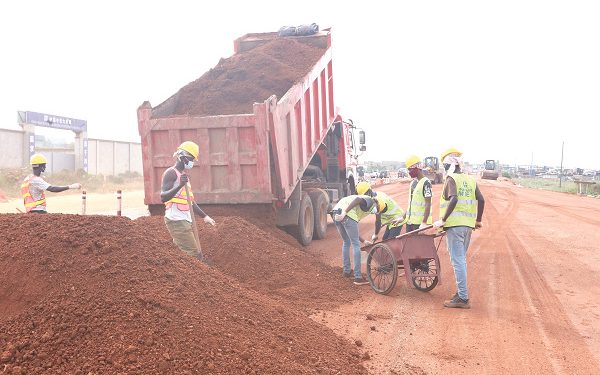 The Teshie Affected Houses Association has charged the contractor working on the Teshie-Nungua beach road to pay compensation due affected landlords.

About 70 persons have had their structures dotted along the stretch affected as a result of ongoing road construction.

Chairman of the Association, David Nii Armah at a press conference said the compensations must be paid by end of next week.

He insisted on the payment of the compensation before any building is removed.

“Nothing has been done. We are appealing to the authorities to do the right thing because they said they will pay us the compensation before they demolish our houses. But the work is going on and yet nothing has been done, so we are appealing. We are ready to move, but we are waiting for the money before we move. We expect the money to come next week, if it doesn’t, we will take action.”

Meanwhile, the engineer on Lot One of the stretch from Kingdom bookshop joining Lot Two at Nungua, Ing. Kwaku Diafo, has indicated that, landlords on the Nungua side of the road have been paid while those in Teshie will also receive their compensation in the coming days.

“We are looking at the compensation issues. Most of them have been resolved. I will say 90 percent, but there are a few that we are awaiting the Land Evaluation Board to give us the figures. That’s in Teshie but luckily for us, most of the structures there are temporary. But for the Nungua side, we have paid everybody, so work is progressing”, he told Citi News.

Government is constructing an interchange at Nungua in Accra as part of a major expansion project in the Teshie and Nungua areas, which to a large extent serve residents within the Tema metropolis.

The current Teshie Beach Road, which is a single carriage road, will be expanded into a dual carriage road from Independence Square to Tema.

It is a 26.6 km project with an estimated cost of US$100 million, being constructed by Messrs Gansu International Corporation and Messrs China Major Bridge Engineering Company Limited.

The first lot of 16 kilometres begins from the Independence Arch to Nungua while the remaining 10.6 kilometres of the second lot continues from Nungua to Tema Community 3.