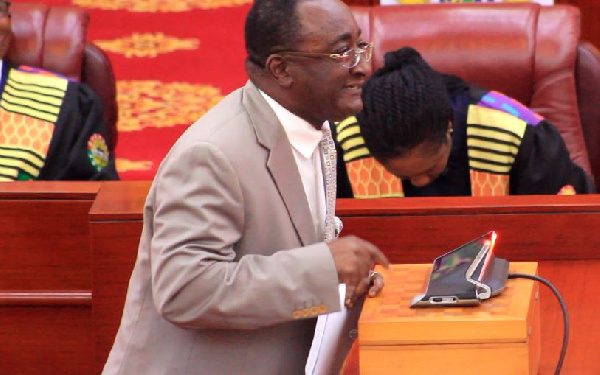 Member of Parliament for the Buem constituency, Kofi Adams is threatening to haul the Minister for Food and Agriculture, Owusu Afriyie Akoto before the Privileges Committee.

He contends that the Minister peddled falsehood on the floor of Parliament when he made contradictory remarks on two different occasions on whether or not equipment was imported into the country for the cultivation of maize.

Speaking to Citi News, Kofi Adams called on the Minister to apologize or face the Privileges Committee.

“I will be applying to the Speaker for the Minister to be referred to the Privileges Committee unless he comes back to withdraw his earlier answer and apologize before I initiate that process. But clearly, we have to test the provisions in our standing orders and the constitution.”

Recently, the Minority Leader, Haruna Iddrisu demanded the urgent summoning of the Minister for Food and Agriculture over the state of the poultry industry in the country.

According to him, the scarcity of ingredients like maize for poultry feed and other teething challenges is gradually crippling the sector.

The ongoing war in Ukraine has left Ghana and the rest of the world short of important grains.

President Nana Akufo-Addo has publicly expressed concern about the shortage of fertiliser and its relationship with the production of grains.

Speaking on the floor of Parliament on Friday, June 17, 2022, Mr. Iddrisu bemoaned the current state of the poultry industry and underscored the need for urgent action.

“There is a seeming problem with the poultry industry in Ghana. Poultry farmers have difficulty accessing what they call poultry feed,” the Minority Leader said.

He noted that the closure of some poultry-related businesses because of some difficulties had come to his attention.

“We are already an unacceptable net importer of poultry when we have the capacity and capability to produce the poultry that we need,” Mr. Iddrisu said.

He noted further that the poultry industry “remains a major source of employment apart from satisfying the protein needs of Ghanaians.”

According to forecasts for 2022, imports of chicken could rise to 400,000 metric tonnes.