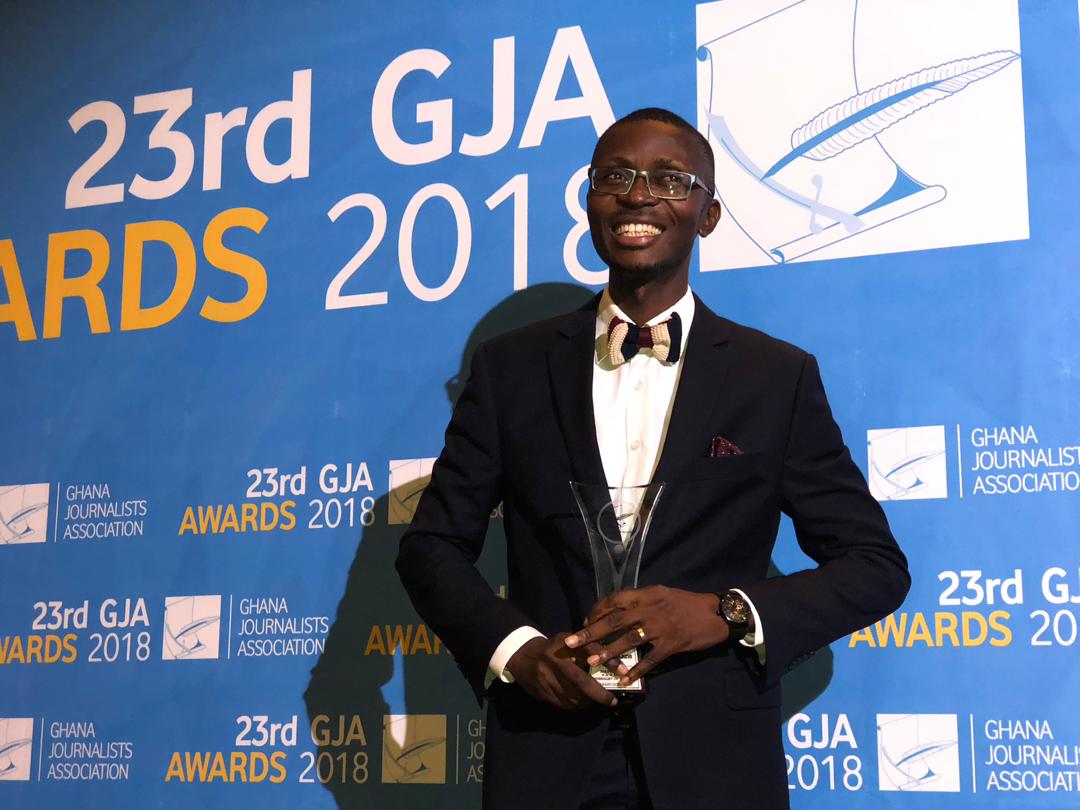 Bernard Avle, 2017 Journalist of the Year.

2017 GJA Journalist of the Year, Bernard Avle, has said that his motivation to pursue a career in journalism was never to receive awards but to make an impact.

He said his priority was to impact society through his work.

[contextly_sidebar id=”fiS4iRHZZpfZtMoPwdHZ7fJNxdBmzldt”]Bernard Avle made the remarks in an interview after being honoured by the Ghana Journalists Association (GJA) at its 23rd annual awards event in Accra.

“I started as a student journalist, and it wasn’t because I was hoping for an award but it was because I discovered I could make an impact in my country and society; an impact that is time-tested.”

He described it as a privilege to be named for the covetous award, noting that it will encourage him to do more.

“It is a real privilege to be adjudged the journalist of the year by a team of judges. It is an honour and an honourable responsibility. I am happy and also humbled and encouraged to do a lot more,” he said

“Winning an award is not a day to necessarily gloat over personal excellence. It is teamwork. For people like me, it is a job to do a lot more to make the profession grow to a point where it can sustain people’s incomes, while we hold leaders accountable and supporting people from obscurity. It is a big challenge and we ask God to help us do that,” he added.

Bernard Avle, who is also the host of Point of View on Citi TV was among about 36 selected journalists in the country who received various awards on the night.

He is the next to win the award after Peace FM’s Kwame Sefa Kayi in 2016.

He expressed his appreciation to Samuel Atta Mensah, other staff of Citi FM and Citi TV and his family for the support.

“I’m happy because this is a recognition of not just what I have done, but what Citi stands for. This radio station has given me the opportunity for the past 14 years to prove myself. So if being one of the leading presenters on Citi, I win this award, it’s a Citi award. So I’m grateful to Sammens and the team for the support, encouragement and guidance and for Team Citi for pushing me.”

He acknowledged veterans such as Abdul Malik Kweku Baako Jnr. and Dr. Charles Wereko Brobbey who contributed to media pluralism and press freedom in the 90s, saying their efforts prepared the grounds for the current media

For his prize, he is expected to receive a cash prize, a three bedroom house and an SUV. Having worked at Citi for fourteen years from a young age, he thanked the CEO of the company Samuel Atta Mensah for giving him the opportunity to serve.

Other awards won by Team Citi

Before Mr. Avle’s award, a show he hosts, the Citi Breakfast Show was named the Radio Morning Show of the year 2017

Also, Citi News’ Kojo Agyeman, also picked up a special award on the night, the second time in a row for his sustained reports on illegal mining in the country.