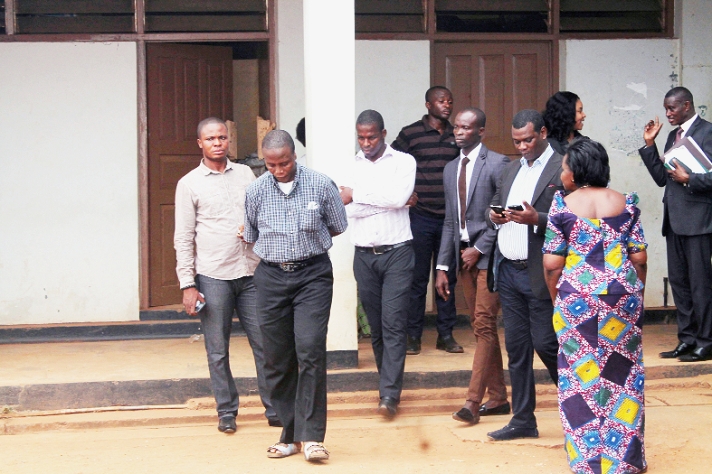 Gregory Afoko being escorted by prosecutors

Human rights group, Amnesty International has called on the Commission on Human Rights and Administrative Justice (CHRAJ) to institute a full-scale investigation into circumstances that compelled the Ghana Police Service to refuse to enforce the bail granted Gregory Afoko by an Accra High Court.

The court had earlier in March 2019 granted Afoko bail to the tune of GHc500,000 but the state ignored the court’s ruling and continued to hold the suspect in custody for about three months.

On Monday, the Accra High Court subsequently indicated that it had quashed the bail granted Mr. Afoko by another High Court.

Amnesty International in a statement said CHRAJ’s investigation should also encapsulate recommendations on the compensation due to Mr. Afoko, and measures to prevent a similar occurrence in the future.

“As much as we are surprised and shocked with the recent decision of the Court to rescind the decision of the earlier court and the turn of events, we want to call on the Commission on Human Rights and Administrative Justice (CHRAJ) to institute a full scale investigation into circumstances that led to Mr. Gregory Afoko’s inability to enjoy his bail granted by the High Court from the day the bail was granted and to the day a new court rescinded the decision of the earlier court and also make such determination whether his Rights to bail has been violated and make such recommendations as to the compensations appropriate to such violations and measures to prevent such occurrences in future.”

The decision by the court to rescind the bail granted Afoko follows an application made by the Attorney General represented in court by Chief State Attorney, Marina Appiah Opare on Monday.

According to madam Appiah Opare, Mr. Afoko will not show up for trial if the court did not rescind the bail granted him by a different High Court judge.

The application was opposed by lawyers for Mr. Afoko who reminded the court that another High Court judge had assessed the facts of the matter and ruled that Mr. Afoko should be granted bail.

One of the lawyers of Mr. Afoko, Steven Sowah Charway, expressed disappointment with the new ruling.

He said the state should have taken the case to the same judge who granted the bail earlier and not a new court.

Gregory Afoko’s family has since said it is considering going to the Supreme Court over the matter.

The family maintains that the judge’s ruling was not within her purview and described it as “completely out of place.”

A spokesperson for the family, Nana Yaw Osei Opoku, told Citi News that: Clearly, if you are not happy with the decision, there are other processes you can take advantage of; the court of appeal or even the Supreme Court to see if that decision can be quashed. Our view is that the judge acted without jurisdiction.”