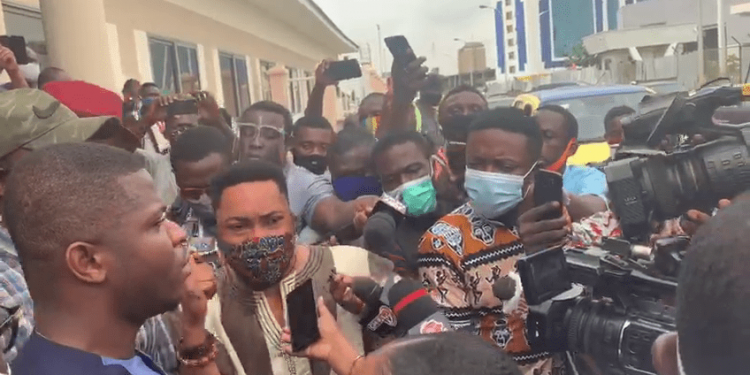 The National Communication Officer of the opposition National Democratic Congress, Sammy Gyamfi, and some members of the NDC, were practically thrown out of the Revenue Division at the Tema Port on Friday, June 26, 2020.

Mr. Gyamfi was with a former Minister of Trade and Industry, Ekwow Spio-Garbrah, and the Member of Parliament for the Bolgatanga Constituency, Isaac Adongo when the incident happened.

Security officers at the port took the action when the NDC officers attempted to address the media at the revenue office of the port.

Mr. Gyamfi and his entourage were at the Customs office to ascertain challenges freight forwarders go through at the port following the implementation of the UNIPASS platform.

Mr Gyamfi, who spoke to the media after the incident, said they were at the Tema Port to assess the impact of the newly introduced Integrated Customs Management System, ICUMS.

“As a political party, we have heard and taken notice of agitations of various stakeholder groups here about the implementation challenges associated with the newly introduced UNIPASS ICUMS system. So we came here to engage with the stakeholders to better understand what the challenges are.”

“We came here to see for ourselves whether the UNIPASS is working smoothly or whether it is not working at all as we’ve been made to understand by the various stakeholder groups here and I am sure you can see the chaotic situation here for yourselves,” he said.

The newly introduced goods clearing system known as ICUMS which went live on June 1 has been widely criticized by freight forwarders who continue to lament over the delays they endure in an attempt to clear goods.

Meanwhile, there is currently an ongoing meeting between the NDC entourage and the various freight forwarders associations at the Mariners club at the Tema Port.

Some of the freight forwarders who spoke to Citi News narrated the challenges they are facing with the newly implemented system.

One of them said: “It used to take us 24hrs or 48hrs to clear our items, but now, it’s taking us three weeks to even get our declarations and your importer will call you and say that you are not competent. What is this system coming to do for us? Is it coming to do us good or do us harm? We are not having access to anything.”

The UNIPASS/ICUMS platform is a new port clearing system that processes documents and payments through one window: a departure from the previous system where valuation and classification and risk management and payment were handled by different entities.

The company which is expected to address key challenges at the ports also replaced the previous service providers, the Ghana Community Network Services (GCNet), which has operated for nearly 17 years, and West Blue Consulting.

ICUMS, which is the name of the Ghana version of Universal Pass (UNIPASS), is built by Korea Customs and is a new all-in-one customs management solution owned by the Government of Ghana.

UNIPASS is the only technology in the area of trade facilitation, security/safety, and revenue mobilization developed by a customs agency aimed at solving customs and trade-related issues. Hence, it is tailor-measured technology.