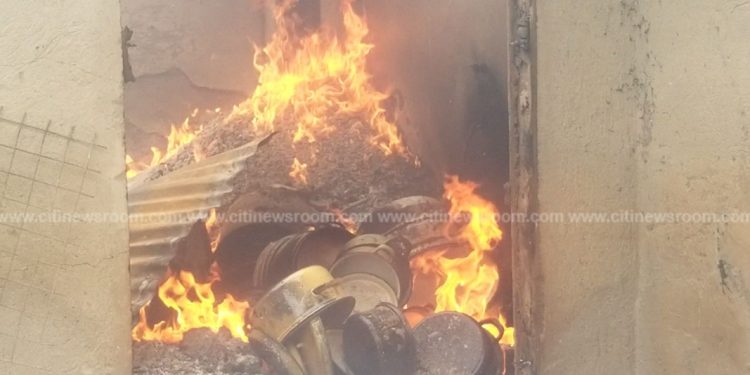 The Navrongo Municipal Police Command has arrested about 10 suspects involved in a clash following renewed land dispute between the people of Doba and Kandiga on Saturday, July 5, 2020.

The recent clash, according to the Command occurred when the people of Doba attacked the people of Kandiga because they were jubilating over the release of some suspects who were arrested following an earlier disturbance.

Six persons lost their lives as a result of the renewed clash while four others sustained various degrees of injury and are receiving treatment at the War Memorial Hospital.

“We have made a lot of arrests, about ten or more who are in police custody. We have also retrieved a lot of weapons. We have retrieved a single barrel shotgun and a pump-action gun from the fighters and a number of live ammunition. We are also on the ground ensuring that peace prevails”.

After a joint emergency security meeting between the Kassena-Nankana Municipal and Kassena-Nankana District Assemblies in Navrongo, some proposals were put forward in an attempt to end the recurring clashes subject to the approval of the Upper East Regional Security Council.

DSP Agyare told Citi News that key among them was for the state to take over the disputed land.

“We are proposing to the Upper East Regional Security Council that we bring in National Security in the provision of security at the conflict area and if possible, the state should take over the disputed land. Once the state takes over the land, then there will be nothing to fight over.”

Meanwhile, a joint military-police personnel has been stationed at the feuding communities to restore law and order.

The Upper East Regional Security Council, chaired by the Regional Minister, Tangoba Abayage is expected to receive the proposed peace roadmap for deliberations and execution.

Chairman of the Navrongo Security Committee and Chief Executive of Kassena-Nankana municipal, William Aduum appealed for peace in the feuding communities and assured that perpetrators of the clash shall be brought to book.

He further hinted that a curfew could be placed on the troubled communities if the situation persists.

“Let me appeal to the Chiefs and people of Doba and Kandiga to allow peace to reign. It is only through peace that we can get development.”

He continued, “This is a farming season and MUSEC will not wish that there is a restriction on movement of people because people have to go to their farms, but if all our persuasions for peace in the two communities fail, then we [MUSEC] will be forced to recommend to REGSEC and government to impose a curfew so that there will be peace in the area.”