Ejura: ‘Be measured in how you handle protesters’ – NDC to security agencies

The opposition National Democratic Congress (NDC), has called on the country’s security agencies to be measured in their handling of the people of Ejura who are only exercising their constitutional right to demonstrate, in the wake of the killing of a community member.

The party says the security personnel must ensure they fulfill their core mandate of protecting the lives of innocent citizens.

In a statement signed by NDC’s Communications Director, Kakra Essamuah, the party said it is greatly saddened and shocked by the happenings in Ejura.

The party also said its National Chairman and General Secretary, had truncated a National Peace Council Workshop in Ada, following the developments in Ejura, and were returning to Accra.

“In view of the fluid security situation in Ejura, the National Chairman, Hon. Samuel Ofosu-Ampofo, and the General Secretary, Hon. Johnson Asiedu-Nketiah, who are currently participating in a workshop at Ada, organised
by the National Peace Council with sponsorship by the UNDP and the Commonwealth Secretariat, have left Ada
and are proceeding back to Accra to take charge of developments.”

“In the interim, the NDC appeals for calm in Ejura, and calls on the security agencies to be measured in the way and manner in which they handle citizens who are exercising their constitutionally guaranteed right to demonstrate to protect the lives of innocent citizens.” 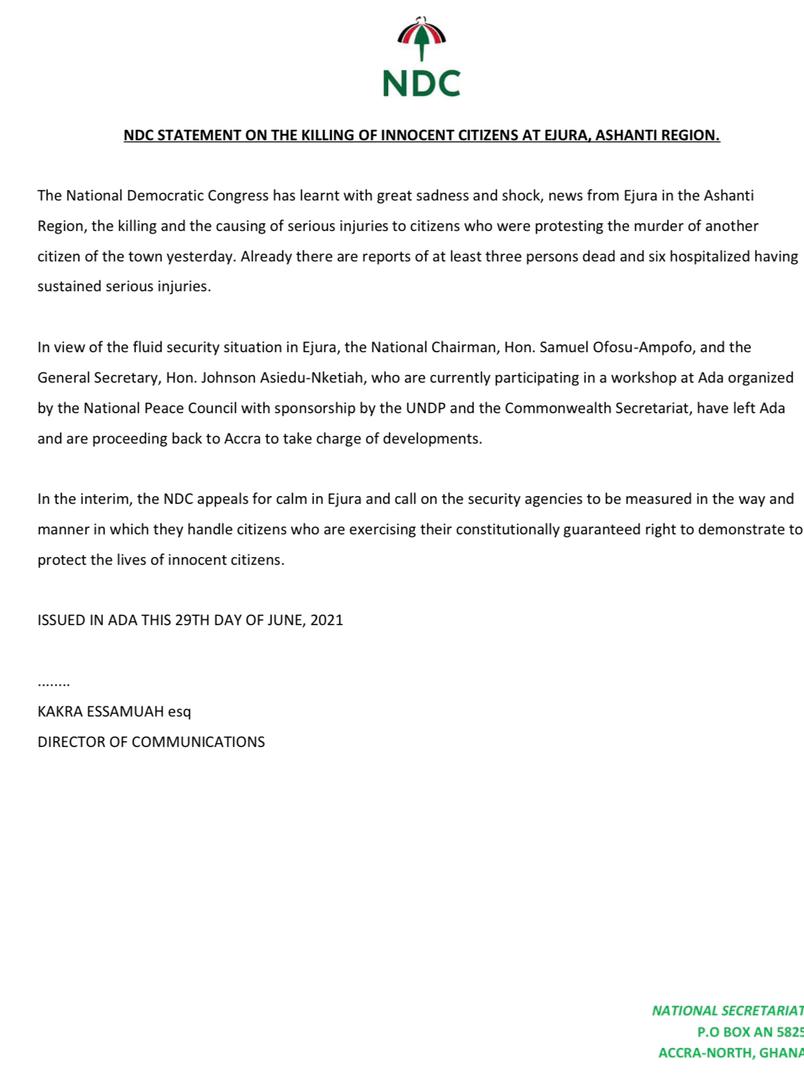 “I urgently call on President Nana Akufo-Addo to initiate an immediate de-escalation of the situation in Ejura,” he said in a statement issued on Tuesday, June 29, 2021.

A social activist, Ibrahim Muhammed, died on Monday, June 28, 2021, after he was attacked by a mob when he was returning home on his motorbike on Sunday.

After the burial, some residents of Ejura were confronted by a team of police and military personnel, which led to the death of two persons after soldiers fired shots into the angry crowd of protesters.