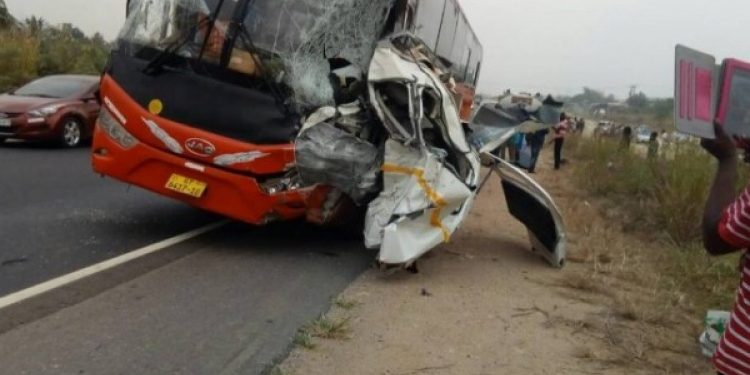 A two-day training workshop on the development of road safety mass media campaign has ended in Kumasi with a call on the government to allocate more funding for road safety interventions, in order to fully tackle the road safety problem.

“Work within the road safety arena is capital intensive and demands the allocation of enough funding resources to enable stakeholder agencies, most especially the National Road Safety Authority (NRSA) to carry out their mandate efficiently”.

The Bloomberg Philanthropies Initiative for Global Road Safety’s (BIGRS) Communication Officer said this during the training workshop organized by the Kumasi Metropolitan Assembly (KMA) in collaboration with NRSA and spearheaded by BIGRS on Wednesday, 13th and Thursday, 14th October 2021 at Golden Tulip, Kumasi.

The workshop, which was organized for communication officers or managers within road safety stakeholder agencies, was aimed at strengthening the capacity of stakeholders within the city of Kumasi to implement road safety mass media campaigns.

Participants also enhanced their knowledge on inter-sectoral partnership and coordination; why, how and when to include mass media into national and local road safety strategy or as part of a program, campaign development framework from planning to evaluation, best practices established in road safety communication, type of resources needed, and how to utilize limited resources as well as internal advocate for the road safety campaigns and funds allocation.

Speaking at the workshop, Dr. Raphael Awuah, the African Regional Advisor on Data and Surveillance for Vital Strategies, suggested that more attention and a sense of urgency ought to be given to issues of road safety just as government did in the advent of the COVID-19 pandemic in the country to curb the spread of the deadly virus.

He expressed concerns over why more attention and resources had been directed to prevent the spread of COVID -19 neglecting issues of road traffic fatalities which have been raging and claiming countless lives for decades.

Dr. Awuah pointed out that there was increasing evidence to show that road traffic crashes led to several deaths and injuries annually, adding that this contributed significantly to the Global Burden of Road Traffic Crashes.

According to him, data from the Global Burden of Road Traffic Crashes in lower-middle-income countries for the year 2019 to 2020 indicated that road traffic injuries were the tenth leading cause of deaths noting that the years 2013 and 2016, recorded approximately 27 deaths per 100,000 population in Africa.

He also used the opportunity to call on road safety agencies in the country to play their part in improving safety, particularly among vulnerable road users.

Mr. Randy Wilson, KMA-BIGRS Initiative Coordinator, stated that although human error plays a major role in the numerous crashes that occur, we cannot fully attribute all crashes to that. He elaborated that failure of the road system could also cause road crashes.

He used the occasion to call on all road safety agencies to play their part in ensuring safety on our rods.

BIGRS focuses on speed management because this is at the core of the road traffic injury problem, speed influences both the risk of having a crash and the severity of consequences resulting from a collision.