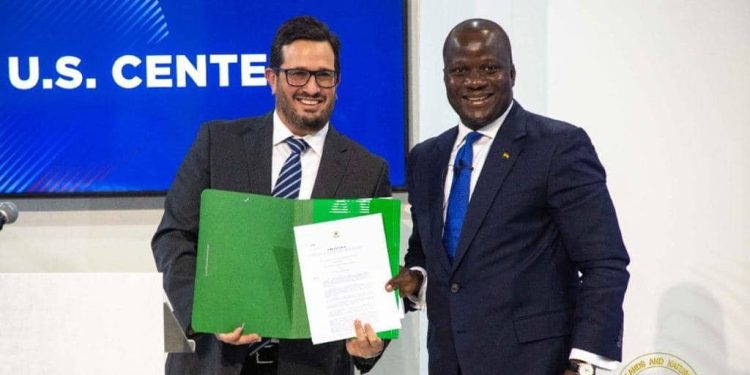 The Minister for Lands and Natural Resources, Samuel Abdulai Jinapor, is advocating for the involvement of local communities in the fight against climate change.

According to him, with Ghana’s readiness to implement the roadmap set up to fight climate change, the participation of locals for consensus building is key.

Speaking during the UN Climate Change Conference on the topic “Facing the Facts Unpacking the Forest, Agriculture & Commodity Trade Dialogue to Tackle Deforestation”, the minister also said the fight against climate change must be tackled with a sense of urgency since it has dire consequences.

“Beyond COP 26, Ghana looks forward to an even deeper engagement in a fact dialogue and the implementation of roadmap actions through public-private engagements. One key requirement will be the need to involve locals and indigenous people and communities to build consensus among stakeholders and to decide and develop a traceability and legality assurance system.”

“Ghana as a committed member of the UN is committed to supporting the fact dialogue, joint statement, and the implementation of the road map action beyond the COP26 to attain 1.2℃. Let us all roll up our sleeves and work with a fierce sense of urgency”.

He added that the government is building a comprehensive national monetary system to monitor other commodity extraction and transactions like rosewood, which has been temporarily banned.

This he said will also help to have a full database of farm locations and farmers to channel the needed support appropriately and also have the right numbers in making provision for farmer resource allocation such as the living income differential.

“We have also put a temporary ban on one of Ghana’s critically endangered species, rosewood. This will provide the best option to communities and the country on how timber can be sustainably managed and legally harvested. Building on this, a comprehensive national forest monitoring system is being developed by the Ghana Forestry Commission as a forest land safeguard tool not just for timber and wood species, but to monitor other commodity extraction and transactions.”

“This system which will have both a human and remote sensing component will be linked to the cocoa management system which is being developed by the Ghana COCOBOD to have a full database of farm location and farmers to channel the needed support appropriately and also have the right numbers in making provision for farmer resource allocation such as the living income differential”.

As conversations on climate change are vast expanding, currently over 25,000 delegates from 200 countries have attended the 26th Conference of Parties (COP 26) climate summit held in Glasgow from 31st October to November 12, 2021, which is aimed at recommitting to net-zero emissions by 2050 as well as big reductions by 2030.

Medikal, Shatta Wale to reappear in court on Tuesday

Medikal, Shatta Wale to reappear in court on Tuesday