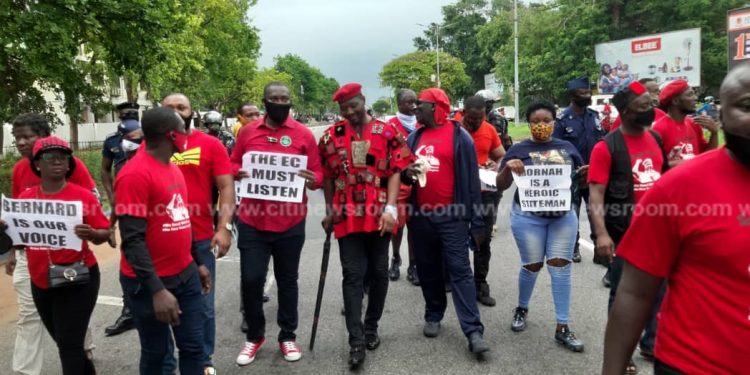 Members of the pressure group, Justice for Ghana, have expressed worry over a directive by the Police to deny them access to Parliament House.

The pressure group’s members were at the entrance of Parliament House on Tuesday to demand that the Electronic Transfer Levy is not passed into law.

This is not the first time the group is registering their displeasure over the controversial E-levy bill which when passed will tax electronic transactions like mobile money transfers by 1.75%.

Speaking to Citi News, the convener for the group, Bernard Mornah, said the police have breached their arrangement to have them enter Parliament House.

“This is not the house of Parliament, but look at where the police have blocked us. The police have become lawless, instead of them maintaining law and order, they are maintaining disorder. We had notified the leadership of parliament that we are coming to occupy the house, and you come and block us. I think that’s unfortunate. If they deny citizens our rights and freedoms, we have no option but to become violent.”

On December 8, 2021, the group converged on the Efua Sutherland Children’s Park to protest the 2022 budget.

The protesters planned to end the exercise by picketing at Parliament House, but they were denied.

The picketing was aimed at putting pressure on Parliament to withdraw the 2022 budget, which they say is not in the interest of the country.

They also did not regard a restraining order from the police accusing them of exhibiting bad faith on their picketing. Bernard Mornah indicated that nothing will stop his team from rejecting the e-levy proposed in the 2022 budget.

It has thus vowed to pitch camp at parliament until the tax policy is withdrawn.