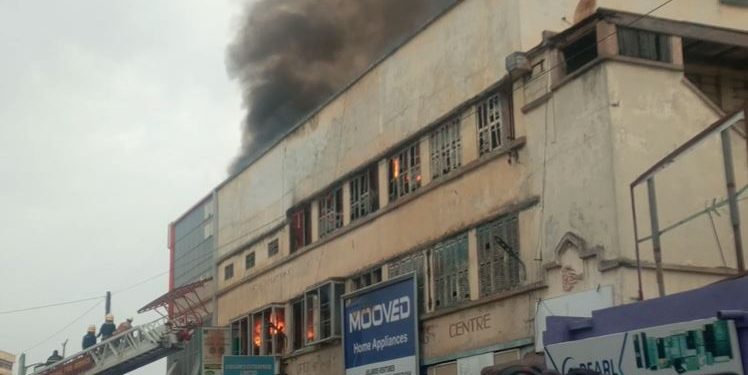 A Wholesale shop known as MOOVED Home Appliances at Opera Square in Accra, opposite  Melcom in the Central Bussiness District has caught fire.

Items such as bags, shoes, and other home appliances have been burnt down to ashes, with no lives lost.

Firefighters with about five tenders are trying to put out the ravaging fire, according to Citi News’ Kennedy Twumasi who’s at the scene.

Fears were that a GT bank branch and a Bank of Africa branch in the same building have been affected, but Citi News’ Kennedy Twumasi reports that only a server room of the bank has been affected so far.

Speaking to an Eyewitness Amoro Ibrahim, the Chinese shop selling the bags and shoes, amongst others, lost most, if not all their items.

“We were able to collect our items, but the Chinese people up there lost their wares to the fire. They(Chinese) have been welding for about 3 days now. I saw one Chinese man running in my direction, and I asked what he was running from. He then said there is a fire outbreak. About 20 mins, we saw the fire explode, and we could not do anything but hurriedly move our things out.

Another Eyewitness, Alfred Doodu, giving his account also attributed the cause to the welding that was going on and suggested that it is high time the Ghana Fire Service got a drone to help make their work effective.

“The welding caused it, the Fire Service however should get a drone. If they had a drone, probably the fire would have been doused by now. It’s been over four hours, five fighters tenders have been dispatched here, yet the fire is still blazing.”

The Police were present to provide protection as anxiousness looms all over.

Team member of the Public Relations Department of the Ghana Fire Service, Adoii Alex King Nartey, says; Our men have been able to work assiduously to prevent the fire from spreading to the other stores, particularly the banks, GT, and Bank of Africa, excerpt the GT bank’s server room. Some of the items in the shops could cause an explosion, but for the hard work of our men, there was no explosion.

The structure of the building is not the best, so it is not about the matter of we not being able to douse the free, we can, and we are, but we have to be very careful as to prevent the building from collapsing.