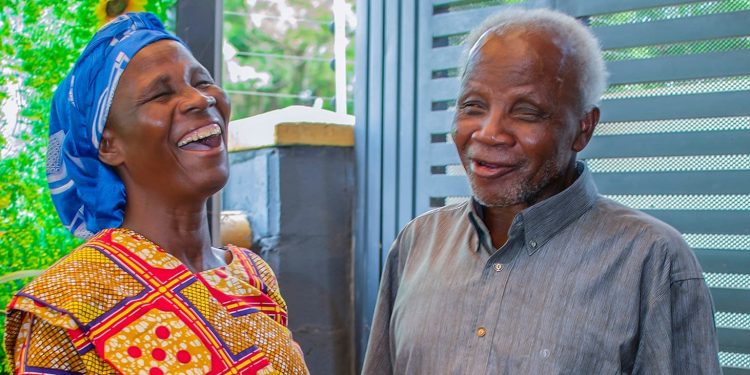 John Asakinaba and Faustina Asakinaba have been married for 37 years.

Their love story, written at Bolgatanga in the Upper East Region of Ghana, is one that leaves many stunned not just because of the longevity of their relationship but also, the fact that they are both visually impaired.

Their son, Emmanuel Asakinaba, who dreams of being an Oxford University graduate and a renowned academic and authority, took to Facebook to celebrate their feat.

According to him, the couple lost their sight in both eyes to measles many decades ago but John Asakinaba trained to become a professional teacher while his mum trained as a weaver at the Rehabilitation Centre for Persons with Disability in Bolgatanga.

The passionate young John, in 1983, was on a mission to encourage parents to bring in their children living with a disability for training when he met Faustina. After getting her parents to agree to her training, he fell in love with her and the two got married two years later in 1985.

Emmanuel Asakinaba, a product of their union, says he believes their marriage sets the pace in many regards.

“I am exceedingly proud of my parents and eternally grateful to God for how far He has brought them. Their marriage is undoubtedly a pacesetting marriage,” he posted on his Facebook page.

Celebrating the 37th anniversary of a pace-setting marriage.

My parents are visually-impaired – blind in both eyes*. They lost their sight as infants. My father lost his sight to measles. My Mum suffered a similar fate. Measles wrought a lot of havoc those days!
My father, a gifted man, became a professional teacher in 1984, after graduating from the Presbyterian Training College, Akropong.

During his days as a student, whenever he was on vacation, he would go to communities and persuade parents of children with disability to allow their children to seek education or learn a vocation, debunking the claim that they were liabilities with all the informed assertiveness he could muster.
It was on one of these visitations in 1983 that he met my Mum, an enterprising, multi-talented, smooth-skinned, sweet-sounding young lady.

After convincing her – and getting the consent of her parents – to train as a weaver at the Rehabilitation Centre for Persons with Disability in Bolga, they fell DEEPLY in love. Needless to say they got married two years later in 1985.

When as a gainfully employed man, my father chose to marry a visually-impaired lady instead of a sighted one, many wondered how they were going to survive as a couple. “Why not marry a woman who can see to help you?” Many quizzed.

Well, it’s been 37 years. And they’re stronger together. They still enjoy each other’s company very much. They still cannot eat anything without first sharing it with them. They still have those lovers’ tiffs. But whatever happens, my Mum will serve him his breakfast. And whether he is angry, has the appetite or not, he will eat his wife’s food to the last morsel.

As the second-born and first male of five children -two boys and three girls – I feel burdened that even at almost 34, I am unable to give them the life of considerable comfort that I have always desired, and worked for. I had hoped to earn a degree from Oxford by 30, and be a renowned academic and author! That remains a dream.
So it is disconcerting for me that even though I do my best possible, (or so I think) I sometimes struggle to provide even what may be considered essential to having a really comfortable life.

But hey, they’re content and full of praise for me. They know I am doing my very best possible. All they desired of me was to marry and give them a grandchild. And by grace, I have delivered on that – fully married, with a Martin Luther King Jr as a son.

I am exceedingly proud of my parents, and eternally grateful to God for how far He has brought them. Their marriage is undoubtedly a pacesetting marriage.

Kindly say a prayer for Mr John Asakinaba and Mrs Faustina Asakinaba. They are proof that disability is not inability and that love conquers all.

May God lift us to higher heights for the sake of our parents. Amen!