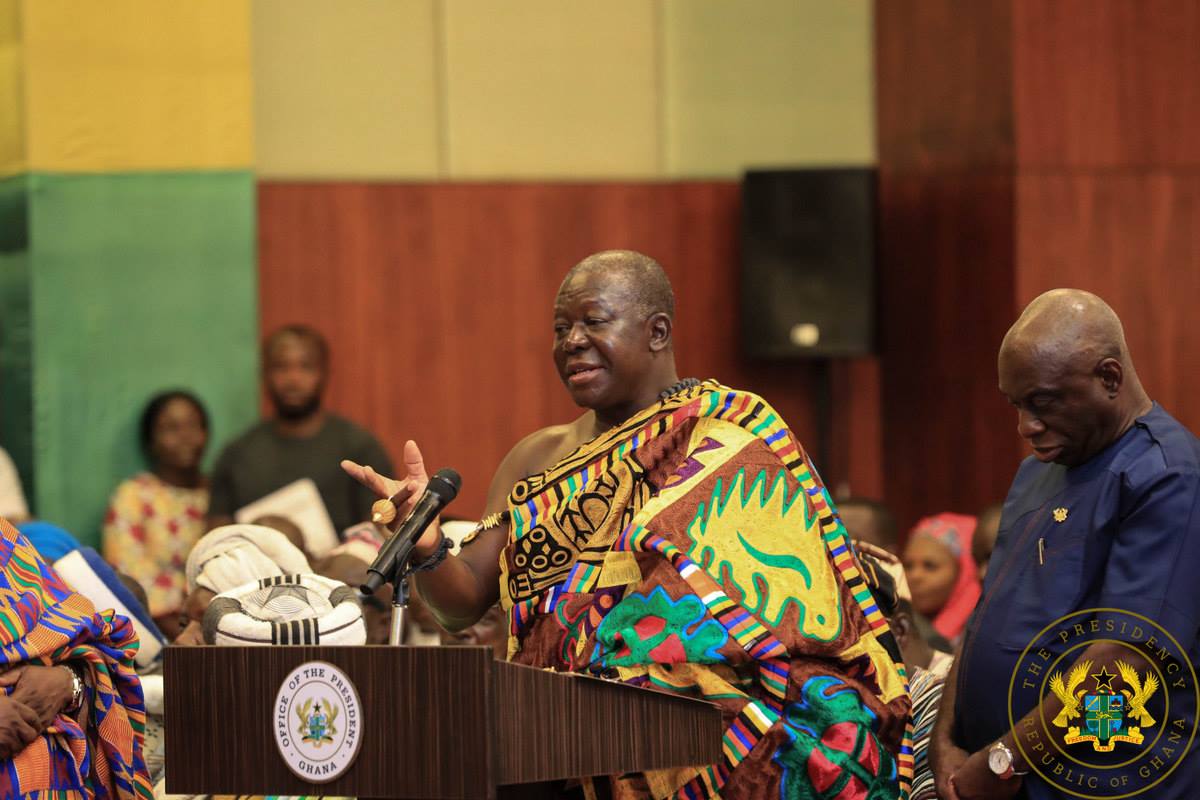 The Committee of Eminent Chiefs, whose works led to the restoration of peace in Dagbon, has touted their efforts by congratulating the newly-elected Yaa Naa, Yoo -Naa Alhaji Abubakari Mahama,

The Savelugu Naa, Alhaji Abubakari Mahama II, was selected to lead the kingdom filling a power vacuum that has existed since the Ya-Naa Yakubu Andani II was killed in 2002.

[contextly_sidebar id=”Sx1SRdFBDc857cnmJDI3Wmb1OfSUqL5Z”]He was in contention along with four others including Kampakoya Naa, Abdulai Yakubu Andani, and Bolin Lana Mahamadu Abdulai.

In a statement, the committee chaired by Otumfuo Osei Tutu II also expressed their appreciation to the Dagbon Kingmakers for the selection process as well as the two families; the Abudus and Andanis for their level of cooperation during the burial of their leaders.

“The Committee of Eminent Chiefs chaired by His Majesty Otumfuo Osei Tutu II, Asantehene congratulates Na Alhaji Abubakri Mahama, Yo-Na on his selection as the new Ya-Na of Dagbon. We thank the accredited elders (Kingmakers) of Dagbon led by the Kuga-Na for having gone by the time-tested customs and traditions in the process of selecting the new Ya-Na.”

“The Committee also expresses its heartfelt thanks to the Abudu and Andani Royal families especially the regents, Bolin-Lana Abdulai Mahamadu and Kampakuya-Naa Andani Yakubu Abdulai for their understanding and cooperation in the performance of the funerals of both Na-Mahamadu Abdulai IV and Na Yakubu Andani II”, the statement signed by the Asantehene’s Chief of Staff added.

The Savelugu Naa, who is in his 70s, has already been offered the symbolic cola and has had his final coronation rituals performed.

Meanwhile, the Committee of Eminent Chiefs has also expressed its resolve to assist in settling all other issues left between the two regents in a bid to consolidate the peace that has finally been restored.

“The Committee assures both families that upon completion of all customs and traditions in the enskinnment of the new Ya-Na, the Committee will engage the Ya-Na in resolving all outstanding issues  pertaining ie. All the funerals of Princes and Elders of Dagbon and enskinnment of both Regents of Na Mahamadu Abdulai IV and Na Yakubu Andani II and other regents.”

The Committee has also appealed to all Dagombas especially the Abudus and Andanis to accord the due recognition and obeisance to the new Yaa-Naa as it charts a  course for lasting peace in Dagbon.

Former President John Dramani Mahama has expressed his excitement over the peace that has finally been restored at Dagbon following the people’s acceptance of the new Ya-Naa.

According to him, this is an effort by successive governments worth celebrating after years of the protracted disputes.

‘So happy for this day, and we should be eternally grateful to Allah that Dagbon has finally seen peace.’

“After many years of hard work, negotiations, long meetings, disagreements, traditional considerations and agreements, we celebrate the efforts of successive governments for this day” he posted on Facebook.

The Asantehene-led Mediation Committee that chaired over the Dagbon chieftaincy stalemate, on November 16, 2018, finalized its road-map to the restoration of peace in Dagbon.

This was followed by the funeral of the late Yaa-Naa Yakubu Andani II from January 4 to 18, 2019.

Both funerals were performed in the old Gbewaa Palace in Yendi.

The committee’s last decision was in line with the current government’s resolve to permanently resolve the age-long Dagbon chieftaincy impasse although similar attempts in the past hit a snag leading to boycotts of sittings at the Manhyia Palace.