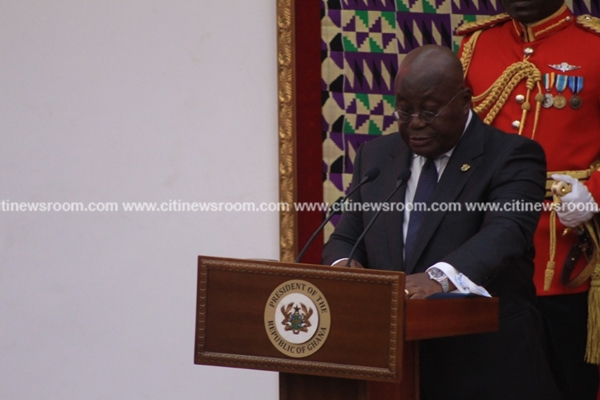 President Nana Addo Presenting the State of the Nation Address

President Nana Addo has reiterated that he will gladly give his assent to the Right to the Information (RTI) Bill soon as Parliament passes it into law.

The RTI Bill has been in Parliament for close to two decades but is yet to be passed despite calls from the media and civil society groups.

[contextly_sidebar id=”ZskkMCubG1sts1rzZMyzfa38XIr6En3e”]The passage of the Bill has delayed in recent times due to contentions over the period of operationalization.

The House and advocates are torn over whether to operationalise it within 12 months or as soon as it is passed into law.

Delivering the 2019 State of the Nation Address in Parliament on Thursday, the President said the Bill would soon be passed into law, given that Parliament had ended its deliberations on same.

” I am happy to state that, as you know, Parliament has virtually completed its deliberations on the Right to Information Bill, and that, any moment from now, the nation will hear the news of its passage. I will, happily, give my assent to it as soon as it is brought to my table.”

The Speaker of Parliament, Professor Mike Oquaye, earlier gave the executive arm of government till Tuesday, February 5, to advise the House on when the long-awaited Right To Information Bill should take effect as a law, to aid its smooth implementation after passage.

“We will give the Appropriate Executive time up to Tuesday to dialogue with this honourable house and consider whether they are in a position to enforce this immediately or not. And I know the Executive will take very good consideration of the matter. Therefore, list the matter for Tuesday so that honourable learned Attorney General will advise us either in writing or in person so that we conclude this matter to the satisfaction of our people as a whole,” he added.

Three advocacy groups bent on seeing to it that the Right to Information Bill (RTI) is passed into law had earlier demanded new changes to the Bill to align with the 1992 constitution.

The Right to Information (RTI) Ghana, the Media Coalition on RTI, and OccupyGhana explained that the technical committee of the coalition reviewed the amendments effected so far by Parliament and recommends to Parliament two main issues that deserve further review.

For the amendments effected to Clause 13, a joint statement from the advocacy groups noted that Clause 13 exempts information that reveals an opinion, advice, recommendation, consultation or deliberation made to any public institution because it is likely to undermine that institution’s deliberative processes.

It said while the coalition acknowledged the need to facilitate the effective functioning of the government and the State, any limits to the constitutional right to information must be narrowly constructed.

It said, unfortunately, the current draft of Clause 13 could be easily misconstrued to severely, if not wholly, dilute the right to information.