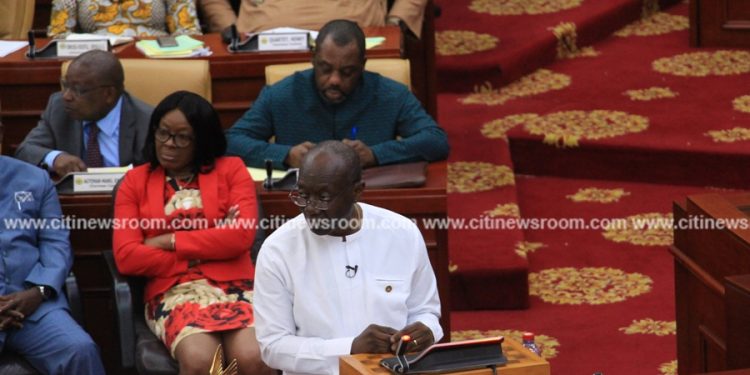 The Finance Minister, Ken Ofori-Attah has disclosed that Government’s planned referendum on the election of  Metropolitan Municipal and District Chief Executives  (MMDCEs) will take place in December 2019.

According to the Finance Minister, the upcoming election of MMDCEs is proof that the government is keeping faith with its promise to Ghanaians.

The Finance Minister made this known during his 2019 mid-year budget review presentation in parliament.

The election of MMDCEs was debated in Parliament ahead of the mid-year budget review with MPs considering the viabililty of the partisan local elections.

Mr. Ken Ofori-Attah also added that the elections of MMDCEs is part of Governments initiatives to ‘move Ghana beyond aid’.

“The creation of an optimistic, self-confident and prosperous nation, as articulated in the President’s Co-ordinated Programme for Economic and Social Development, is becoming a reality to the citizens of our dear country. We are indeed moving Ghana Beyond Aid.

“Mr. Speaker, the implementation of the 2019 budget is on course…. In keeping with our promise, the referendum to decide on the election of MMDCEs will come off in December, 2019.”

Mr. Ken Ofori-Attah said that Government has also started paying contractors adding that a number of commencement approvals for work on roads, drains, and fish landing sites have been issued.

“We have started paying contractors who have certificates valued up to GH¢500,000 and plan to the clear these by the end of the year.”

The Public Procurement Authority has saved the country GH¢2.7 billion over the past 31 months.

The Minister for Finance, Ken Ofori-Atta disclosed this during the presentation of the 2019 Mid-Year budget review of the government in Parliament on Monday.

According to him, the savings is a significant achievement of the Akufo-Addo government as the NDC govermment made no savings while in office.

“In a space of 31 months, by reviewing contracts that were either sole-sourced or procured through restrictive tendering, the Akufo-Addo administration has made savings of $2.75 billion, which breaks down to $800 million in 2017, 1.1 billion in 2018 and 1.085 billion in 2019,” the minister said.

Government is proposing to Parliament the withdrawal of the luxury vehicle tax introduced in 2018.

While presenting the 2019 mid-year budget review in Parliament on Monday, the Finance Minister, Ken Ofori-Atta said government is taking such move following the concerns raised over the tax.

“Government in 2018 introduced the Luxury Vehicles Levy to raise revenue. We have noted suggestion from the general public on the implementation of this tax and Mr Speaker, as a listening Government, we are proposing to the House the withdrawal of the levy. We will continue to improve compliance, expand the tax net and explore other innovative sources of raising revenue,” he said.

Earlier this month, the Minority in Parliament demanded the removal of the luxury vehicle tax which it deems as “economically inefficient.”