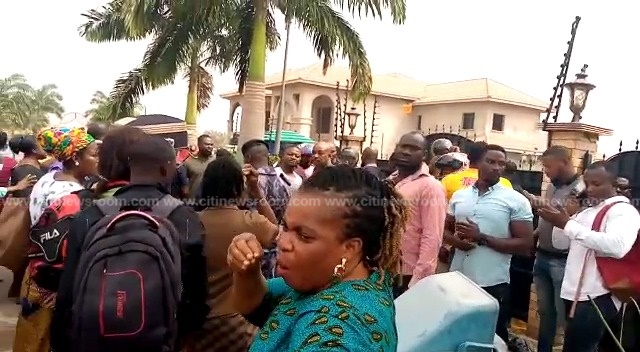 The customers of collapsed gold dealership firm, Menzgold who were arraigned last January for besieging the residence of the company’s Chief Executive Officer (CEO) are expected to reappear in court later today, Tuesday, February 11, 2020.

They will be facing charges of unlawful entry, offensive conduct and breach of the peace.

The customers were arrested and put before court in January 2020 after they stormed the Trassaco residence of  Nana Appiah Mensah (NAM1) to demand payments of their investments.

They have been accused of overpowering the security personnel at the Trassaco Valley Estates and entering the premises after which the police came in to restore calm.

According to the customers, they did not break into the residence contrary to reports that indicated that they forced their way into the Trassaco Valley Estates, leading to their arrest rather.

They were subsequently granted bail a few days after they were earlier denied same.

Meanwhile, the coalition of aggrieved Menzgold customers Ghana has described as disappointing seeming attempts by the Accra Police Command to frustrate a planned march to the Presidency today.

The Coalition had written to the Police Administration in line with the Public Order Act, notifying the Police of their plan to present a petition to President Akufo-Addo today at 1.30 pm, on their locked up investments.

But the Police in a response signed by Regional Commander, DCOP Frederick Adu Anim said it is fighting robbery and other violent crimes as such cannot accept any form of demonstration, picketing and walk during the period.

The Police also claimed that the coalition had demonstrated in a matter of less than six months, as such, it will not be able to tolerate any new protest.

But a spokesperson for the coalition, Frederick Forson, in a Citi News interview say the posture of the police is disappointing.

“It is just a matter of presenting a petition to the presidency because of what happened at Trasacco. We want to respect the law so even if it only two police officers, we will accept that. We have not held any demonstration in the last six months. We do not see how the police will determine how many times we can organise a demonstration. To be very honest, we are really disappointed. We will be meeting to look at other options and see how we can go around it.”