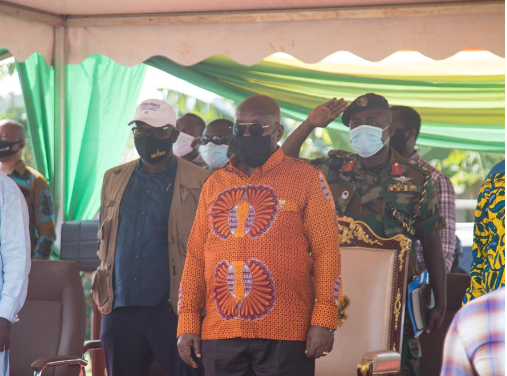 The President, Nana Addo Dankwa Akufo-Addo has condemned the recent clash that ensued between some members of the governing New Patriotic Party (NPP) and the opposition National Democratic Congress (NDC).

According to him, violence does not have a place in the country’s politics.

He thus urged residents of Odododiodoo and Ghanaians at large not to support political parties that engage in violence.

The President ended his comments by saying the clash that ensued at Odododiodoo is not acceptable and must be condemned by all.

President Akufo-Addo made the comments at a mini-rally at Odododiodoo as part of his tour of the Greater Accra Region.

“We want peace in Accra in the upcoming elections. We should allow everyone to go and vote in peace. It is not about fighting. If you (politician) have to use violence to win, then you don’t have anything for the constituents. So everyone who does that should be ignored and condemned. Elections are just a contest of ideas, and we don’t need violence to be able to do that.”

President Akufo-Addo further asked residents to eschew all forms of violence and vote peacefully in December.

“So please I beg of you, we don’t need violence in our country. We want peace. The world is watching Ghana in our upcoming polls, and we should show them that respect ourselves and understand democracy well.”

Supporters of the New Patriotic Party and National Democratic Congress on Sunday, October 25, 2020, clashed at Jamestown in the Odododiodoo constituency.

The supporters pelted each other with stones, bottles and other projectiles.

The fighting was concentrated on the Atta Mills Highway at a junction called One Way.