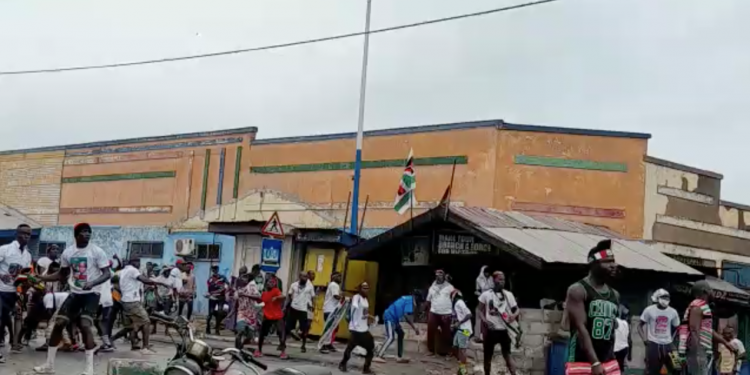 Supporters of the New Patriotic Party (NPP) and National Democratic Congress (NDC) have clashed at Jamestown in the Odododiodoo constituency.

15 persons were wounded following the attack in one of the Greater Accra Region’s known hotspots ahead of the general elections.

Videos in circulation have seen men in party colours throwing stones, bottles and other projectiles on a street at each other.

The fighting was concentrated at on the Atta Mills Highway at a junction called One Way.

Police sources indicated that both parties have filed complaints with police following the incident on Sunday.

The wounded are receiving treatment at the Korle Bu Teaching Hospital.

Tensions are normally high in Odododiodoo ahead of elections and observers flag it as a volatile constituency.

Reports of violence have been noted since the start of 2020.

In January, the Member of Parliament for Odododiodoo, Nii Lante Vanderpuye, claimed he was assaulted by National Security personnel.

This led to a clash between NPP supporters and NDC supporters in front of the Jamestown District Police Headquarters.

Also in September 2020, the incumbent MP claimed he was attacked by persons believed to be national security operatives.

The MP recounted that he was attacked in front of the James Town Police station after he had gone to help a journalist he commissioned for some work in the constituency who had been detained by police.

The journalist was getting footage of an ongoing project for a documentary but was purportedly detained on “orders from above,” according to Mr. Vanderpuye.