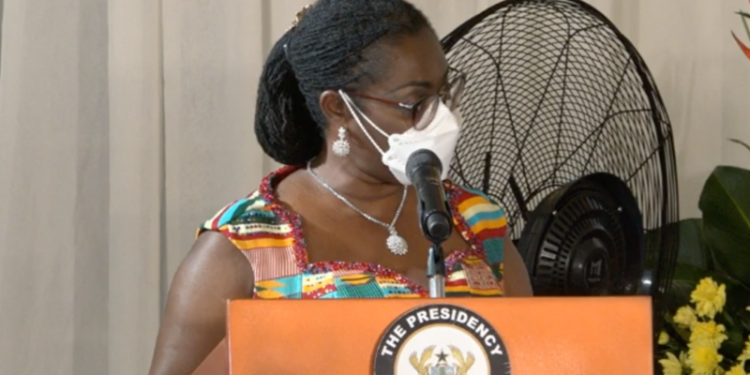 The freshly sworn-in Ministers of State for President Nana Akufo-Addo’s second term have promised to work solely in the interest of Ghanaians to ensure massive socio-economic transformation.

They have thus asked for support from citizens to enable them to do so.

Communication and Digitalization Minister, Ursula Owusu-Ekuful who spoke on behalf of the new Ministers after their swearing-in ceremony was grateful to the President for the honour done them.

“We express our sincere appreciation to the President and thank him for the confidence reposed in us. We pledge not to let you down and live up to the oaths that we have sworn and discharge our responsibilities to the best of our ability.”

Mrs. Owusu-Ekuful expressed the commitment of her colleagues to delivering on their mandate in a manner that will be beneficial to the entire nation.

“We urge all Ghanaians to continue to remember us in your prayers so that we can work together to justify our inclusion”, she added.

In all 28 out of 30 Ministers of State were sworn into office at the Jubilee House on Friday evening.

Ken Ofori-Atta is yet to go before the Appointments Committee to be vetted due to complications from COVID-19 while Ebenezer Kojo Kum was unable to attend the swearing-in ceremony due to ill-health.

President Nana Addo Dankwa Akufo-Addo has tasked his newly-outdoored ministers to make it a priority to add value to the country’s system of governance.

He said this is the only way the renewed four-year mandate given his New Patriotic Party (NPP) administration by Ghanaians can be well expressed.

“I am assured that the various background of each one of you will bring value to the governance of our country and enable us to deliver the commitments of our manifesto- the secret compact that ties us the New Patriotic Party to the Ghanaian people”, the President said.

While touting his first-term successes in the areas of health, education, infrastructure, accountability and industrialization, President Akufo-Addo assured that his government is in the “process of putting this nation onto the path of sustainable progress and prosperity,” in the next term.

“I urge you to provide leadership that will ensure that work that we do, benefits the progress of our nation and help raise the living standard of our people. That is why we are here and that is why the Ghanaian people voted for us.”