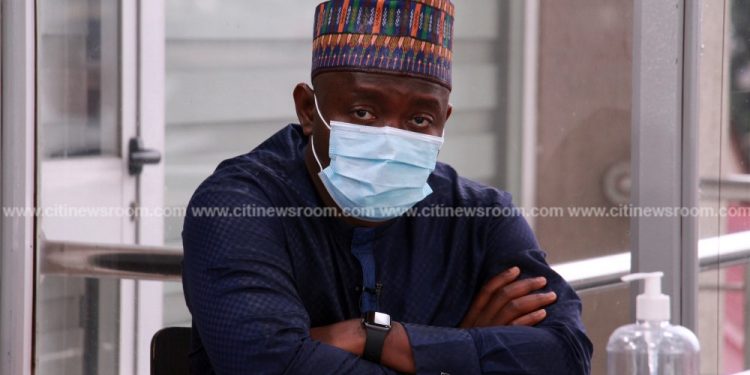 The Member of Parliament for the Tamale North Constituency, Alhassan Suhuyini, has said the Chief Justice, Kwasi Anin-Yeboah, must guard against actions that drag the name of the judiciary into the area of politics.

The MP’s comments follow the Chief Justice’s petition to the General Legal Council (GLC) against the NDC’s Dr. Dominic Ayine.

A displeased Anin-Yeboah wrote to the Judicial Secretary to the General Legal Council to complain about some comments made by Dr. Dominic Ayine on a CDD-Ghana platform on the judgment of the 2020 election petition.

The letter addressed to the Chairman of the Disciplinary Committee of the General Legal Council, accused Dr. Ayine of stating that “the Supreme Court’s failure to apply the rules of procedures as well as the consistent and continuous dismissal of the petitioners’ applications or reliefs were the basis of his assertion”.

The opposition National Democratic Congress (NDC) and its Minority caucus in Parliament, have called on the Chief Justice to withdraw the petition against Dr. Dominic Ayine.

The party insists the petition is an attempt by the Chief Justice to “intimidate and suppress views that are at variance with his.”

“Our position on this matter is simple. Dr. Ayine’s views about the independence of the judiciary are views he is entitled to in line with his freedom of expression guaranteed under the 1992 constitution. He was courteous to the court and kept his language temperate and decent. He stayed within the boundary of professionalism and was neither scurrilous nor scandalous,” Johnson Asiedu Nketia said at a press conference on Monday, June 21, 2021.

The Tamale North legislator, Mr. Suhuyini, also finds the move by the Chief Justice problematic, since he believe places him in the arena of politics.

Speaking on Citi TV’s Breakfast Daily on Tuesday, June 22, 2021, he urged the Chief Justice to withdraw his petition.

“I speak knowing that the NDC’s call on the Chief Justice to withdraw the petition is not based on the conclusion or assumptions that Dr. Ayine is wrong. Our call on him is not a call for mercy, but our call on him is a call for him to act and do what is right. It is in the interest of our democracy and the interest of free speech. It is not as if we are pleading for him to withdraw the petition. So if Dr. Ayine says he is right with what he said, we also believe he is right and that is why he should not be facing any probe. We have doubts as to how these processes will go because he is the leader of the GLC, and we know what happens in this country. The CJ must avoid situations that put him in the political space. There have been a number of times he has sent NDC-affiliated lawyers to the GLC.”

“So those things coupled with many others put the CJ squarely in political affairs, which is not good for our judicial. That is why I am saying that his conduct can go a long way to tarnish the image of the judiciary and compromise the judiciary further. We know judges vote in this country. They have political parties they vote for; but when their overt actions make it so easy to determine where they belong in politics, especially when they are leading the judiciary, then that is dangerous. So he must guard against that and not drag the judiciary into his politics. It is not safe.”