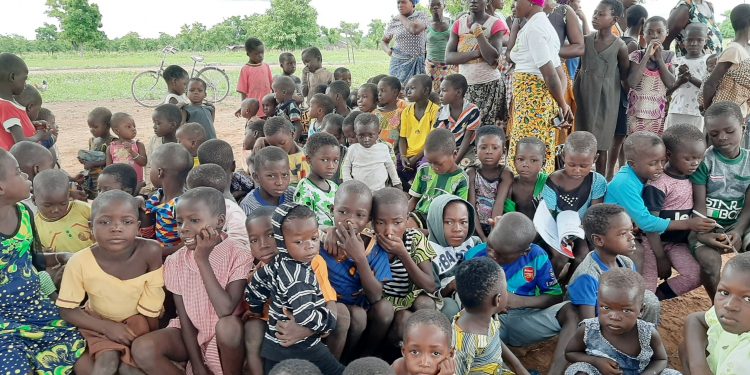 Residents of Dikpali in the Nanumba North Municipality are appealing to the government to put up a befitting school block for the town, as children in the community study under trees.

Pupils from KG 1 to primary six all study under trees following the destruction of a hut that was put up by the community.

School closes by 12pm if the sun is scorchy or any time rainy clouds gather.

Dikpali is a community in the Nanumba North municipality with a population of over 700.

The community lacks a proper school block, as the only structure that was put up by community members has been destroyed.

Pupils from KG 1 to primary 6 all study under trees, and classes have been combined because there are not enough trees on the compound to provide adequate shade.

There is no proper furniture in the school, and the pupils sit on pieces of wood. The blackboards are hanged on the trees.

The residents are thus making a passionate appeal to government for a school block.

Some of the community members have been expressing their worries to Citi News.

Gmanle Ali, community chairman, said, “Our problem here in the community is the school. We don’t have a proper school. We have visited the Nanumba North district assembly on several occasions to complain, but we are yet to see or hear any positive news. The structure we built ourselves have been destroyed and now, our children have no place. The children study under trees and anytime, the clouds are gathering, school comes to an end. Teachers stay in Mimbilla, when they come, and it’s getting to 11, they close because the sun will be scorching. We are appealing to government to come to our aid.”

Gurundow Dobi, community chief Gurundow Dobi noted that “the Dikpali school was started by me. I put up the structure, recruited teachers to teach, and we pay them. It continues until government adopted the school and posted teachers. I pleaded with the District Chief Executives for a proper school, but to no avail. We are farmers, and now there is no fertile land to farm, so if our children are not educated, what would they do? So we are making a passionate appeal to government to assist us”.

The School’s Head Prefect also told to Citi News how he and his colleagues have been suffering as a result of the situation.

‘’We are suffering as children. We don’t have a proper school structure and so any time the sun is scorching or clouds are gathering, the school closes. We are left behind in our studies, our colleagues elsewhere are getting better tuition”.

Efforts to get a response from the Nanumba North Municipal Assembly proved futile.