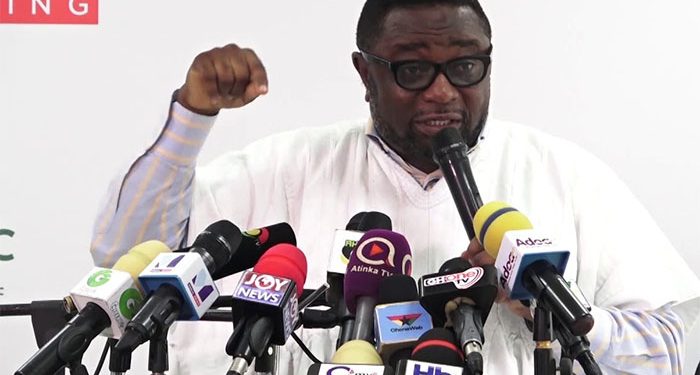 Director of Elections for the opposition National Democratic Congress (NDC), Elvis Afriyie Ankrah, says the government is taking Ghanaians for granted with what he terms a “deceptive approach” to the fight against illegal small scale mining also known as ‘galamsey’.

For him, both the New Patriotic Party (NPP) and President Nana Addo Dankwa Akufo-Addo have reneged on their promise of tackling the menace to save the country’s natural resources because it was politically motivated.

In a media interaction, Elvis Ankrah lamented the devastating effects of illegal mining on the country, stating that efforts to tackle the menace will come to naught if the government continues to handle the practice with party colourization.

“Galamsey is now a national security threat, the water bodies have been so contaminated. Our water bodies are under threat. Before the NPP came to power, we all saw the state of the water bodies, although there was some form of illegal mining and the measures that were put in place.”

“NPP came, and they pretended that they were going to stop it. What they rather did was that they stopped those who were in the trade and gave the opportunity to their party people because the party needs money”, he claimed.

Mr. Ankrah simply cast doubt on the government’s renewed fight in Nana Addo’s second term, stating that the failure of the state to remedy the situation in its first term is proof that, the government has failed in the fight.

“So when they seize excavators, they give it out with the concession to their party people. They are the ones involved, so they shouldn’t deceive anybody with these gimmicks. They couldn’t do anything about it in four years. Their people at the highest level are involved”, he added.

Elvis Afryie Ankrah is of the strongest conviction that “the problem with this illegal mining is with Nana Addo and his NPP party. So long as they are in power and control the security sector, I do not see anything different happening.”

The government has gone hard with its latest fight, including the use of the military and the burning of seized equipment from illegal mining sites.

There are those who think setting the equipment ablaze is wrong and rather believe that the seized equipment be used for other equally important national activities.

Others have also raised questions about the legality of the action, since the Minerals and Mining Act does not recommend the destruction of seized equipment.

President Akufo-Addo has however dared those who disagree with the burning to go to court.

But the Elvis Afriyie Ankrah will not even give the government a pat on the shoulder as he remains doubtful. He is of the view that; “All that they are doing is just PR and razzmatazz. The government is complicit. I don’t have any hope that this situation can be solved under this government because where we are heading is an unmitigated disaster.