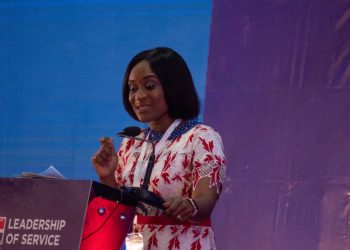 ShareShareShareShare
A Deputy Minister of Finance, Abena Osei-Asare, has hinted that the government may be reviewing the implementation strategy of the proposed Electronic Transaction Levy (E-Levy) in the coming days.

Speaking at a Deloitte Economic Dialogue Webinar on the 2022 budget-themed ‘Digitalisation as a catalyst for economic recovery and growth’,  Abena Osei-Asare stressed that government is indeed concerned about promoting a cashless society as well as financial inclusion.

“But at the same time, it [Government] is also concerned about raising revenue to reduce our dependence. So we need to look at it that way.”

“This is a very good initiative by the government and I encourage everyone to engage government and support us to implement this very good measure that will rake in close to about GHS 7 billion to help in the development agenda in terms of youth employment, development of road infrastructure and cybersecurity,” she added.

She further noted that the government is not oblivious of the concerns being raised over the proposed E-levy, adding that “I believe that some form of a position will be taken by the government in shaping the implementation strategy and announcement on the E-Levy.”

The CEO of the Ghana Chamber of Telecommunications, Ing. Dr. Kenneth Ashigbey, reiterated the position of the chamber that taxing merchant payments will be detrimental.

“What you will rather want to do is to encourage a lot more of MSMEs to use digital forms of payments so that instead of taxing people who already pay direct taxes. I say so because if we say we are exempting those who transact less than GHS 100 a day, we will still end up not achieving the objective of raking in the informal sector.”

He suggested that government rather encourage those in the informal sector to use the universal QR code.

“Our suggestion is that we leave out the merchant payments, let these people in the small-scale use the Universal QR code. Let’s encourage merchants who are currently using their individual mobile money accounts for transactions to sign up as merchants.”

“This will go a long way to creating a transparent system in terms of the income they are making.”

On her part, the CEO of Ghana Enterprises Agency, Kosi Antwiwaa Yankey-Aryee agreed that every Ghanaian has to be taxed in one form or the other.

She, however, thought Ghanaians are reluctant because there hasn’t been enough education on the levy.

“I think that we should respect the ordinary Ghanaian enough not to complicate the issue. Most Ghanaians do not understand. What the E-Levy seeks to do is to create a level playing field for every Ghanaian. How will that work? Quite simple. You pay a levy on something you do and that will be used to support SMEs and entrepreneurs in the long run.”

“For years, we have had conversations on how best to bring in the informal sector in the tax net…as to whether this is the right way or not, we need to look at the data with which the Finance Ministry is working if 30 to 40% of the people fall within those who send below GHS 100,” she added.

About the proposed e-levy

The 1.75% tax on electronic financial transactions was proposed in the 2022 budget presented to Parliament by the Finance Minister, Ken Ofori-Atta, on Wednesday, November 17, 2021.