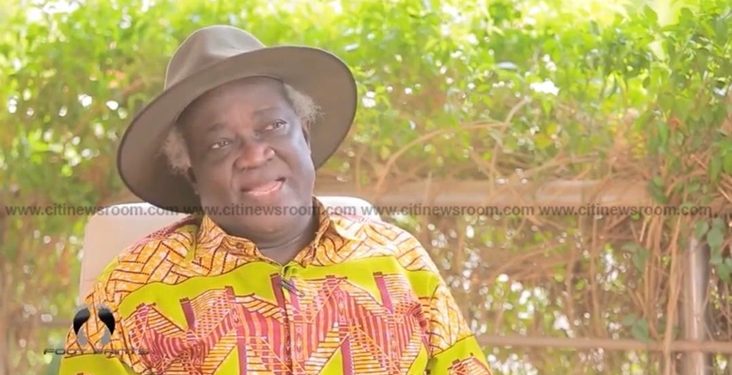 All Regional Youth Organizers of the National Democratic Congress (NDC) have hit hard at NDC stalwart, Prof. Kwamena Ahwoi over the publication of his controversial book; “Working with Rawlings” within a period they term as “crucial times”.

In an elaborate statement to Prof. Ahwoi, the 16 youth organizers intimated the book has the propensity to derail the party’s focus for the 2020 elections.

The Youth Organizers were not happy with the content of the book which they claim directly attacks NDC founder, Jerry John Rawlings.

They say, “whatever is to be achieved with this book is not greater than the salvation of this nation and the future of its youth come 7th December 2020.”

But according to the Youth Organizers, “the book contains many controversial issues that subtly undermine the great and selfless service, the Founder of the NDC has rendered both to the party and to the country and further seems to betray the trust and confidence of leading members of our party.”

Already, the former President, Rawlings has discredited the claims in the book, emphasizing that Ahwoi’s claim is borne out of a desire to control the party.

Here is the full statement from them:

WE WILL NOT TOLERATE ANY OLD TIMER WHO HAS NOTHING TO LOSE, 2024 NOT AN OPTION; RESPONSE TO ‘WORKING WITH RAWLINGS’

“We have read with deep concern, the litany of issues coming from the release of the book, ‘Working With Rawlings’ by Prof. Kwamena Ahwoi and what it means for our party in these crucial times.

While we find it refreshing that one of the elders of our great party will offer us a glimpse of his time in public service, especially working with H.E Jerry John Rawlings, we have cause to question his motive for writing this book and releasing it at such a time. We are also concerned about how the book can derail our focus and what seems to be a direct attack on the founder of our party.

The NDC is preparing to cause the biggest political upset in the history of this nation and the last thing we need is a piece of inaccurate historical accounts that will distract us.

The book contains many controversial issues that subtly undermine the great and selfless service, the Founder of the NDC has rendered both to the Party and to the Country. It further seems to betray the trust and confidence of leading members of our party.

The timing for the release of this book is very callous and inconsiderate on the part of the writer. What could be more important than our preparation to rescue this nation from the hands of unrepentant divisive despots?

Certainly not a literary piece filled with self-gratifying accounts of events many eons ago.

We are in a middle of a Voters Registration Exercise; at a time we are battling an existential threat of tribal and ethnic marginalization by this administration and the party now has to turn to dealing with issues from the past. Some of which we have found to be false and vain claims by the author.

Let me state on account of young people of our party that, we will not tolerate such subtle overtures to undermine our efforts in this election year because 2024 is never the option to us. We will not tolerate any ‘old timer’ who has nothing to lose and will rather implode the party with needless bickering and fictitious stories.

In less than two weeks since the book was launched, the book has been served with many rejoinders and ‘disassociations’ from cited individuals who have disproved some claims made by the writer. This is damning and points to the inaccuracies of accounts stated in the book.

We must add that we have nothing but respect for the old Professor. Indeed, it no secret that no other family has been involved in governance and benefitted more from politics under the Fourth Republic than the Ahwoi family. We also do not downplay their contribution to the cause of our nation and party, but he got it wrong this time.

Whatever is to be achieved with this book is not greater than the salvation of this nation and the future of its youth come 7th December 2020.

We want to assure Papa J that, we will defend his legacy in the party and in this nation. No book or folklore will water down his legacy. This year, as we have discussed, the Youth of the party is campaigning with him. We reassure him that we will remain the vanguards of his legacy.

This election is for the youth of the Party and we are poised for Victory and nothing, absolutely Nothing shall come between us and the Victory of the Party. We will no longer tolerate divisive figures or commentaries and all must be assured that we will crash any individual or group of persons who act as such.”