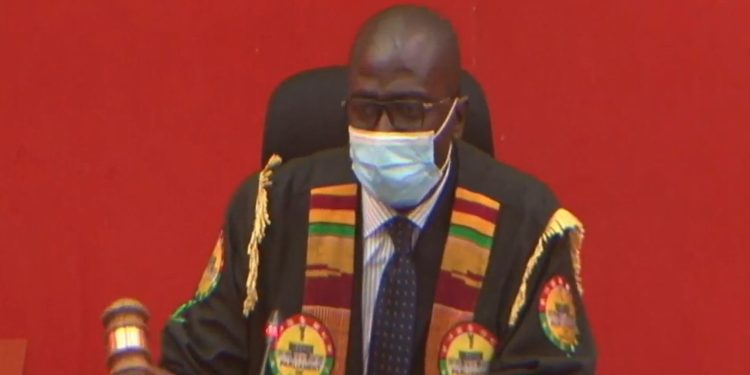 Joseph Osei Owusu, the First Deputy Speaker of Parliament, literally abandoned the chairing of proceedings in Parliament on Wednesday, December 1, 2021, after he had suspended sitting for an hour following confusion that erupted after he ruled against a motion by the Minority Caucus.

The Minority Leader, Haruna Iddrisu, asked Parliament to set aside the approval of the 2022 budget statement by the Majority on Tuesday, November 30, 2021.

After a lengthy debate on the matter, Mr. Osei-Owusu who chaired the sitting in the absence of the Speaker turned down the motion.

He subsequently suspended sitting for an hour following the confusion that ensued after his ruling.

Hours after the suspension, the Second Deputy Speaker, who’s the Independent MP for Fomena, Andrews Asiamah, assumed the Speaker position instead of the First Deputy Speaker.

Prior to the adjournment, Haruna Iddrisu raised concerns with the 1st Deputy Speaker’s ruling.

“For the record, we expected the 1st Deputy Speaker, who was in the chair, to put a question on a motion that was moved by me and seconded by Honourable Mahama Ayariga, but he chose to give a ruling. We intend to question his ruling on that matter and to insist that he puts a question on the motion. And also to remind the Majority that, a majority is members present in the chamber and voting, not any imagined numbers sitting somewhere or elsewhere,” the Minority Leader said.

While chairing proceedings earlier on Wednesday, Joseph Osei-Owusu, insisted that he was not wrong in associating himself with the Majority side to approve the 2022 Budget Statement and Economic Policy of the Nana Akufo-Addo government.

The First Deputy Speaker included himself in the total number of Members of Parliament (MPs) in the House before having the motion for the rescission of the rejection of the 2022 Budget moved on Tuesday.

This upset the Minority in Parliament, who insisted that the move is in clear breach of the parliamentary standing orders.

“I am a member of Parliament, the Second Deputy Speaker is also an MP and our role is to assist the Speaker in managing the house. So any attempts to read and interpret the constitution to include the deputy speakers is a misreading” Mr. Osei-Owusu argued.

The Minority side in Parliament last Friday threw out the 2022 budget statement after the Majority Caucus staged a walkout.

The Minority had insisted that the 2022 budget in its current form was not in the best interest of Ghanaians and thus requested a revised budget.

Members of the Majority Caucus on Tuesday, November 30, 2021, also overturned the earlier decision by the Minority and approved the policy document.

A number of Ghanaians have lambasted their representatives in Parliament for subjecting the budget to such legal gymnastics.