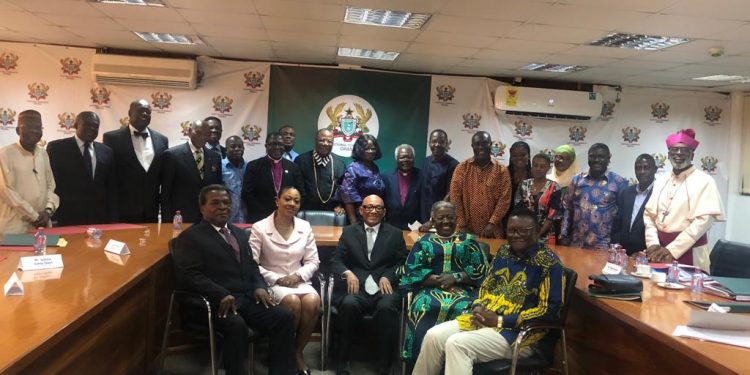 The meeting is on the back of the recent controversy surrounding the Electoral Commission’s plan to procure a new election management system and also compile a new voter’s register.

A statement signed by the EC’s acting Director of Public Affairs, Sylvia Annoh, on behalf of the Committee, said the planned meeting seeks “to engage with the Inter-Party Advisory Committee on the Electoral Commission’s plan to compile a new Voters’ Register ahead of the 2020 Presidential and Parliamentary Elections.”

But these plans are being opposed by a coalition of opposition political parties known as the Inter-Party Resistance Against New Voter Register.

The group maintains that any money spent on the register will be a waste of taxpayer money.

The NDC even went as far as walking out of a meeting with the EC on December 10, 2019, when the matter came up.

The EC had earlier given suggestions that it was determined to go ahead with its plan without the buy-in of the opposing political parties, raising concerns about the lack of consensus among the stakeholders.

But on the 15th of January, 2020, the EC’s Eminent Advisory Committee called for calm and said it planned to meet the various stakeholders on the matter.

Hundreds of protesters last Tuesday, poured onto the streets of the Ashanti Regional capital, Kumasi to join in a demonstration to put pressure on the Electoral Commission to abort its decision to compile a new voters’ register ahead of the 2020 general elections.

Addressing a rally after the demonstration, the National Chairman of the NDC, Samuel Ofosu Ampofo announced the suspension of planned subsequent demonstrations due to calls by the EC’s Eminent Advisory Committee to calm as they work to ensure a meeting organized with the EC.

“Due to the respect we have for our Eminent elders, the NDC and the other parties that form the coalition and CSOs, we will suspend our demonstrations and wait on the Eminent personalities, to see whether the EC will listen to them and allow us to meet to dialogue on this matter”.

The meeting upcoming meeting is expected to bring finality to the matter.